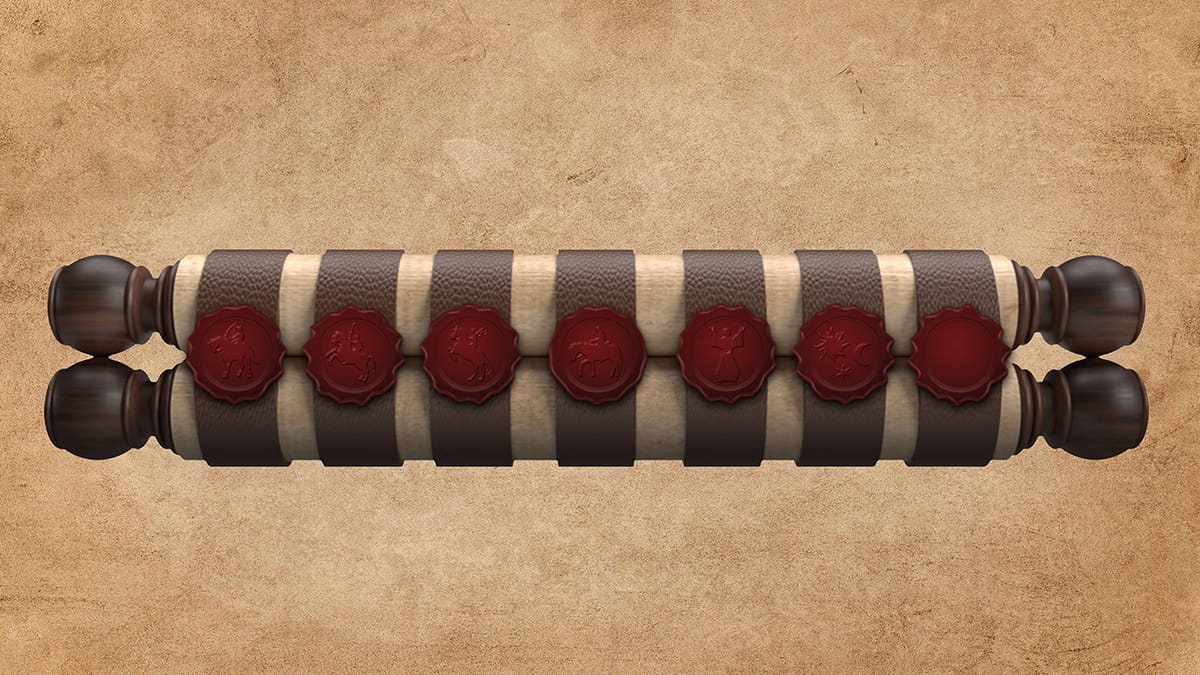 An artist's impression of the scroll sealed with seven seals. It is likely the seven seals were actually arranged so that as each seal was broken more of the scroll and its writing could be unrolled and read.

The Revelation of Jesus Christ, which God gave unto him, to shew unto his servants things which must shortly come to pass; and he sent and signified it by his angel unto his servant John:

The prophecy of Revelation – not a prophecy as yet mainly unfulfilled, but rather a prophecy which has been unfolding in history ever since the apostle John received it from Jesus Christ. And one that is now approaching its climax.

The majority of the book of Revelation concerns the prophecy of the seven-sealed scroll. The content of this scroll is revealed in stages by the successive breaking or opening of the seven seals upon it.  The visions contained and described in the scroll are an age-spanning revelation of Jesus Christ to his servants. They chart, in symbolic form, a chronological series of events and eras in the New Testament age, starting from the time the apostle John received them, through to the time of Christ's return and beyond.

These three sets of approximately 21 visions are collectively the story of the Iron Kingdom, or final Fourth Beast, of Daniel's visions. This kingdom was and is the dominion of Rome. The idolatrous influence of Rome was to extend over the entire era between the first and second coming of Jesus Christ. It was to be the final, the greatest, the longest lasting, and the most terrible of the succession of four kingdoms – Babylon, Persia, Greece, and Rome – before Christ's return. It was the only one of the four to exist in and, indeed, throughout the era of the New Testament.

The glory, decline, and fall of Rome

The altar and martyrs
Earthquake and eclipse
The 144,000 sealed
The Seven Trumpets

The fall of pagan Rome and decline of papal Rome

The fall of papal Rome

The structure of the prophecy

The era of the Seven Seals

The Roman Empire was established by Augustus, in whose reign Jesus was born. The Iron of the fourth kingdom of Daniel's visions was to extend until the coming of the Son of man in the clouds of heaven.

The Iron becomes the Iron and Clay

The latter phase represented the empire of Rome being broken up and mixed with other peoples to form ten nominal kingdoms that remained under the dominion of Rome. The iron of Rome continues from the thighs to the toes, but the clay mingled both weakness and division into the strength. Both phases constituted one continuing iron kingdom in God's eyes. The second phase is, however, the one most emphasised in the prophecies.

In history, these phases represent Rome – pagan and papal. The original Western Empire and seat of Rome became Catholic Europe. Both were idolatrous, and both dominated by Rome.

The prophecies of Daniel and Revelation indicate the power dominating this final phase would, in its later stages, begin to fall and be consumed, even by the ten kingdoms, and at the return of Jesus Christ would finally be destroyed.

The era of the Seven Seals visions

The vision of Nebuchadnezzar's Image in the book of Daniel (see here) described a succession of four worldly kingdoms until the Second Coming of Jesus Christ. The fourth and final kingdom is the era of the Seven Seals visions in Revelation.

The great eras and events of Rome

The Seven Seals prophecy, which constitutes the bulk of the book of Revelation, is the tale of the final two kingdoms of Daniel's visions – the kingdom of iron, and the kingdom of stone. It is a chart of the history of Rome, and its age-long conflict with, and ultimate defeat by, the Kingdom of God.

The visions of the Seven Seals deal with the glory, decline, and fall of Rome, in both its phases. The seventh or last Seal deals particularly with the fall, which is expanded upon in the Trumpets and Vials. The Seven Trumpets focus mainly on the fall of the Roman Empire in the West and East, and the Seven Vials on the fall of Papal Europe.

These visions describe the glory days of Rome under the Five Good Emperors from Nerva to Marcus Aurelius, the subsequent plunge into civil war from the time of Commodus, the oppression and exhaustion of taxation and industry as a result, and the following era of additional external wars, famines, and devastating plague that brought the Empire to the point of dissolution until the time of Diocletian. They describe the last and greatest imperial persecution of Christianity under Diocletian, and the subsequent reversal and overthrow of paganism, and the 'Christianisation' of the Empire from Constantine to Theodosius, and the corruption of nominal Christianity as a result.

The Trumpets describe the invading waves of Goths, Vandals, and Huns under Attilla, (the clay mingling with the iron) and the breakup and fall of the Western Empire. They then turn to the long fall of the Eastern Empire under the rise of Islam and the Saracen and Turkish Empires, and the final fall of Constantinople, before turning back to the Reformation in the West that began shortly after in the 1500s.

A supplementary vision at this point reviews the history of western Europe and the dominance of the Papal power since the fall of the Western Empire, before the Seven Vials describe the final judgments of the French Revolution, the great naval warfare with Britain, the Revolutionary and Napoleonic wars, the fall of the Papal States, the drying up of the power of the Ottoman Empire, the rise of evil ideologies, and finally the entrance into the Seventh Vial with the great World Wars of the Twentieth Century. The final vial concludes, yet future, with the destruction of papal Rome and a great storm of war and invasion from the north. These events are followed by the vision of the return of Jesus Christ.

The general series of historical events described here are the major movements in the history of pagan and papal Rome, and their unfolding has been identified, traced, and anticipated by many writers over many centuries (many of which are well-documented in the old books available for download on this website). Their correspondence with the symbols in the prophecies is evidenced not only by the events themselves, but in the use of these same symbols by secular writers and historians in describing the same events, and by many other biblical passages which demonstrate the consistent interpretation of the same symbols.

The Historicist understanding, outlined here, is one that over 1900 years after John wrote the Revelation can now in the majority be tested and compared with history. The chronological sequence of the visions can be seen to fit the major events of Roman and European history like the cuttings of a key – in the right order. The prophecy of the seven-sealed scroll is, as it was intended to be, a prophetic chart and brief history of the future.

The First Seal describes Rome at its height, shortly after John wrote the Revelation. The next five Seals describe its decline, and the last its fall. This is expanded on in the Trumpets and Vials, covering the fall of both Imperial and Papal Rome.

The visions of Daniel

Two of Daniel's visions were particularly related: the one of a great metallic idol composed of four metals, and the other of four fantastic beasts. These were parallel visions describing the succession of four kingdoms before the Kingdom of God.

A timeline of the Seven Seals visions

The events and eras of the Seals, Trumpets, and Vials visions, dominated by the era of Papal Europe and the Islamic Empires. The Seventh Vial, in which we find ourselves and which began with the World Wars of the twentieth century, will come to its close with the return of Jesus Christ.

Chart of the Seven Seals

A basic chart of the eras and subjects of the Seven Seals visions. This chart is taken from The Book of Revelation by A.J. Ferris – published in 1940 as two simple booklets, Part One and Part Two. You can download a reprinted copy of the booklets here.
Next up – The First Seals intro

A note about the interpretation given here

The basic understanding of prophecy outlined in this website is known as the Historicist interpretation. It was the standard understanding of Protestant churches from the time of the Reformation in the 1500s until the early to mid 1800s onwards.

The interpretation here is generally in line with historicist writers on prophecy from the 1800s such as E.B. Elliott, H. Grattan Guinness, E.P. Cachemaille, Joseph Tanner, and Albert Barnes among many others. Some of their books can be downloaded elsewhere on this site (here and here), and supporting extracts from their works are given on most of the following pages.

The prophecies of Daniel and Revelation are extensive and complex, “in which are some things hard to be understood”, as the apostle Peter said of the writings of the apostle Paul. The details of the interpretation I give here do not necessarily represent the views of all individual pastors within the Revival Fellowship, neither should they be taken as a definitive statement of Revival Fellowship doctrine.

Return to top of page