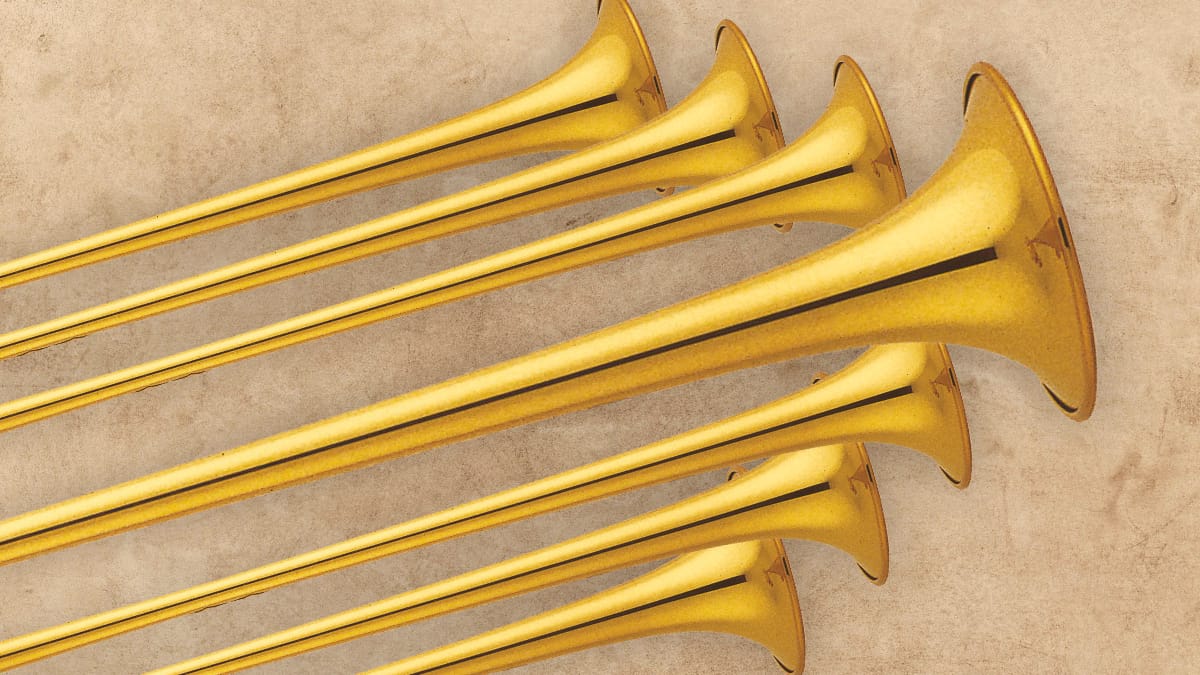 Seven angels sound seven trumpets in succession. Each sounding heralds a new vision, and a new stage in history.

And when he had opened the seventh seal, there was silence in heaven about the space of half an hour. And I saw the seven angels which stood before God; and to them were given seven trumpets.

Imperial Rome falls, and two great apostasies arise in its place in the east and the west. Rome is revived in a new divided and mingled form, and the Dark Ages descend on Europe. But with the final Trumpet blasts, the dawn begins to break, and Rome’s judgment begins.

When we reach the vision of the Seventh Seal, we find it is composed of another sevenfold series of visions – the Seven Trumpets. They are further visions within the vision – like subheadings under the main heading.

The visions are revealed in succession, as seven angels come forth one after another to sound seven trumpets.

The overall subject of the Seventh Seal is the fall of Rome. The Seven Trumpet visions therefore expand on this subject. And since there are two phases to the dominance of Rome, pagan and papal, the Trumpet visions ultimately cover both.

The first six Trumpets deal mainly with the fall of the pagan or imperial phase. These correspond to the solid iron legs of Nebuchadnezzar’s metallic image in the book of Daniel. They describe the fall of the Western, and then the Eastern, Roman Empire. The sixth Trumpet contains a second vision describing the Reformation – the beginning of the fall of the papal phase. This is the phase of Rome’s dominance that corresponds to the feet of iron and clay in Daniel’s vision. It is the era of the ten mingled kingdoms of Catholic Europe.

The last Trumpet particularly describes the final fall of papal Rome. And like the Seventh Seal before it, it is expanded on in a further sevenfold series of visions - in this case, the Seven Vials of God’s wrath.

The fall of pagan Rome and decline of papal Rome

The first four Trumpets deal with the waves of invasion that brought the Western Empire to extinction: the Goths under Alaric, the Vandals under Genseric, the Huns under Attilla, and the eclipse of the west by Odoacer.

The last three Trumpets were described as the Woe Trumpets. They were to extinguish the Eastern Empire, and to witness the dominance of Islam and Catholicism for over a thousand years. The last Trumpet consists of the Seven Vials.

The fall of papal Rome

The Fifth and Sixth Trumpet visions are unusual in that they cover a very extended period – the era we know as the Dark Ages. The visions of this era are also the only ones to be given a prophetic, and symbolic, time frame. These two Trumpets follow the decline and fall of the Eastern Roman Empire, and describe the rise and progress of the power that brought it to an end – the religion of Islam and the Islamic Empires of the Saracens and Turks.

The era of these events in the East runs in parallel with the era of Papal dominance in the West, after the fall of the Western Empire. This era in the West is also given a prophetic time frame, which runs in parallel with those ascribed to the Islamic Empires. This prophetic period is mentioned a number of times in both Daniel and Revelation. Among other reasons, it is likely these time frames are given to confirm the extended duration of these particular Trumpet eras.

These eras, in both the Eastern and Western areas of the old Roman Empire, form the major portion of the great tribulation prophesied to come upon Israel and the true Church.

The Fifth Trumpet describes the birth and rise of Islam in the East, and the subsequent development and conquests of the resultant Arabian or Saracen Empire. Like the locusts of Arabia they swarmed rapidly over a vast area, but did not bring the Eastern Empire to an end.

As the Arabian empire began to wane, the Turks took up the religion of Islam in the time of the Sixth Trumpet. Around 1000 years after the time of Christ, the Seljuk and then the Ottoman Empires began to dominate the east, and finally brought the Eastern Roman or Byzantine Empire to its end.

The era of great tribulation

Roman Catholicism and Islam came to be the two dominant religions in the area of the old Roman Empire. Both the power of the papacy and the religion of Islam arose together around 600 years AD, and both held sway in their respective areas throughout the Dark Ages. Both the temporal power of the Pope, and the Ottoman Empire came to an end in the late 1800s and early 1900s. But the religious influence behind them remains.

The Sixth Trumpet, like the Sixth Seal, has primary and secondary visions. The first four Trumpets describe the fall of the Western Roman Empire, and the Fifth and Sixth Trumpets then trace the decline and fall of the Eastern Roman Empire. But the East continued for almost a thousand years after the West broke up into the nations of Europe. With its fall in 1453, the visions that form the second part of the Sixth Trumpet cross back to the West to describe the Reformation taking place there in the early 1500s. A series of supplemental visions in the next few chapters then regress to fill in the parallel history of the West during that same period, bringing us up to the era of the Seventh Trumpet.

Chart of the Seven Trumpets

A basic chart of the eras and subjects of the Seven Trumpets visions. This chart is taken from The Book of Revelation by A.J. Ferris – published in 1940 as two simple booklets, Part One and Part Two. You can download a reprinted copy of the booklets here.
The Seventh Seal
The First Trumpets intro

A note about the interpretation given here

The basic understanding of prophecy outlined in this website is known as the Historicist interpretation. It was the standard understanding of Protestant churches from the time of the Reformation in the 1500s until the early to mid 1800s onwards.

The interpretation here is generally in line with historicist writers on prophecy from the 1800s such as E.B. Elliott, H. Grattan Guinness, E.P. Cachemaille, Joseph Tanner, and Albert Barnes among many others. Some of their books can be downloaded elsewhere on this site (here and here), and supporting extracts from their works are given on most of the following pages.

The prophecies of Daniel and Revelation are extensive and complex, “in which are some things hard to be understood”, as the apostle Peter said of the writings of the apostle Paul. The details of the interpretation I give here do not necessarily represent the views of all individual pastors within the Revival Fellowship, neither should they be taken as a definitive statement of Revival Fellowship doctrine.

Return to top of page