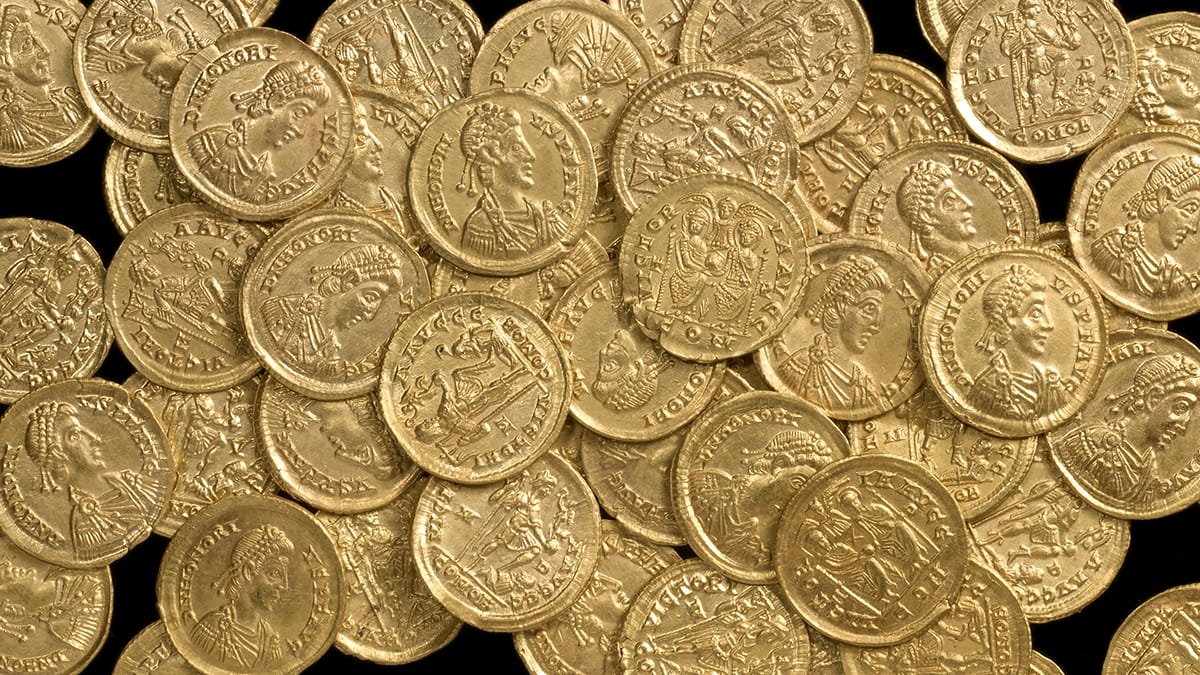 Part of a Roman coin hoard of 55 gold coins.

And when he had opened the third seal, I heard the third beast say, Come and see. And I beheld, and lo a black horse; and he that sat on him had a pair of balances in his hand. And I heard a voice in the midst of the four beasts say, A measure of wheat for a penny, and three measures of barley for a penny; and see thou hurt not the oil and the wine.

Ongoing infighting and division drains the economy and industry of the empire. Rival contenders for rule must pay their armies to ensure their loyalty, bringing dark and oppressive times for the people.

The ongoing civil war brought with it a time of severe oppression and depression for the people and industry of the empire. The horse turns black. The historian, Gibbon, highlights the decreee of the emperor Caracalla which brought greatly increased taxation, as an important contributing factor in the decline of Rome. Though effort was made by later emperors such as Alexander Severus to keep the taxation from becoming overly oppressive, this “noxious weed” as Gibbon put it, continued to spring up in the suceeding age and flourish, and “darkened the Roman world with its deadly shade.” 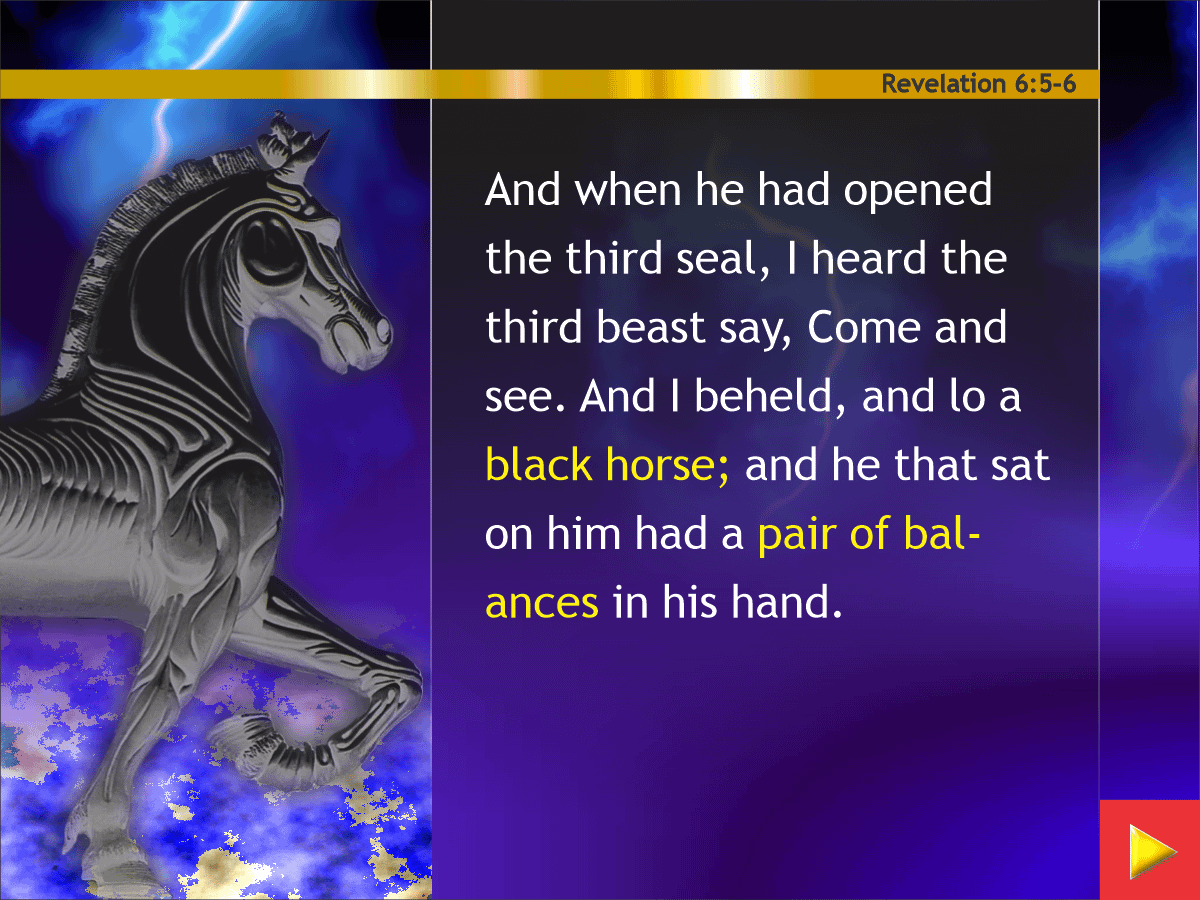 The Third Seal introduces another factor in the decline of the Roman Empire, related to the civil warfare of the Second Seal. The incessant civil wars exhausted the finances of the Empire and brought heavy taxation and oppression. The Third and Fourth Seals follow logically from the effects of the Civil Wars of the Second Seal.

This Seal requires perhaps a little more care in its interpretation, though the general impression is clear enough. The black colour of the horse (or Empire) represents a dark time for Rome, in opposition to the glorious time of the white horse. The balances or scales, together with an ear of corn, are a symbol used by the tax-collecting provincial governors (procurators or questors) of Rome. 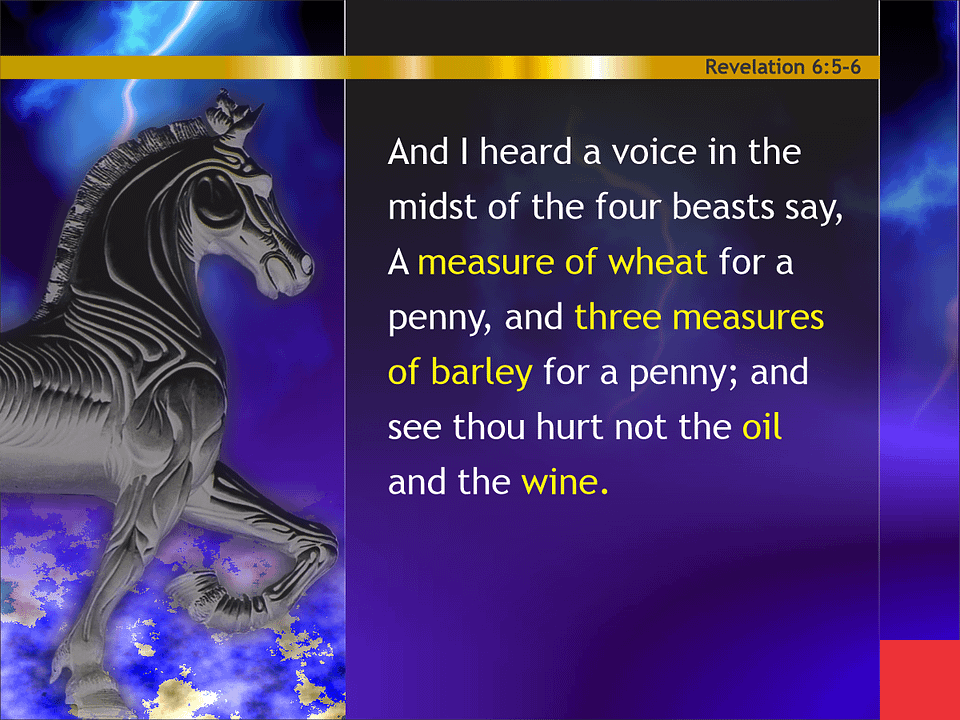 A voice of authority and justice (speaking from the midst of the Cherubim – “the powers that be are ordained of God”) declares a measure and rate, and warns against “hurting” the oil and wine. The word translated “hurt not” is also translated in Revelation “unjust”, and the meaning may be that the entire saying is a stipulation of a just or official price for wheat and barley, and not to be unjust in the case of oil and wine (see E.B. Elliott's discussion in the book below).

This (as shown in a subsequent slide) is almost identical to the laws sometimes passed in Rome to alleviate corruption by the provincial tax-collectors. Without an official rate, and the enforcing of it, the rate of produce paid in taxes was open to great corruption by these men.

The vision may then be an indication of heavy and corrupt tax collection and oppression, but with some official attempt (represented by the voice) during the period to curb excesses.

The price for wheat and barley here (according to Elliott) may indicate scarcity, but certainly not the famine often associated with this vision (a famine clearly appears within the next seal and is more the result of the ongoing oppression represented in this one ). The oil and wine symbols do not seem to fit a picture of famine either.

The emperor Caracalla, during the period of civil war started earlier, introduced heavy and oppressive taxation which continued to afflict the empire even through and beyond the era of Diocletian. This affliction generally continued in spite of some alleviation and attempted correction of abuse by emperors such as Severus Alexander.

The influence of the Black Horse continues parallel with the civil war of the Red Horse, even to the time of Diocletian.

Note here the reference to the “increase [of] the dangerous power of the army”. The influence of the Second Seal continues through this time.

The edict of Caracalla gave all provincial inhabitants of the empire the title of Roman citizens, previously restricted to the inhabitants of Italy. This made them subject to the heavy taxes associated with the rank, but did not deliver any of the compensation connected with the title. They were not absolved of their previous provincial taxes but rather now subjected to the extra tax that went with being a citizen of Italy.

The historian, Gibbon, recognised this edict of Caracalla, and its ongoing effects, as being an important cause in the decline and fall of Rome. Though the oppression was at times mitigated by other emperors during this period of civil war, it reappeared during the period (and beyond it) again and again.

The oppression of the aggravated taxes darkened the lives of those within the empire.

The ongoing oppressive taxation, and corruption of the provincial tax-collectors, was at times relieved by an emperor such as Severus Alexander who attempted to curb the excesses of the provincial governors, but to no lasting avail. The problem is referred to here as darkening the Roman empire with a deadly shade – fitting the dark colour of the horse under this Seal.

The blackness of the horse, representing the Empire and its oppressed state at the time, reflects the blackness associated with the pained state of people in other times in scripture:

Joel 2:6
Before their face the people shall be much pained: all faces shall gather blackness.

Nahum 2:10
She is empty, and void, and waste: and the heart melteth, and the knees smite together, and much pain is in all loins, and the faces of them all gather blackness.

Official rates were sometimes set in the Empire to curb the ability of provincial governors to set their own rates when collecting taxes in produce rather than coin. The Roman coin in the slide shows a set of balances in one hand and a sheaf in the other. The famous Roman anti tax-corruption law here stated, though from a different period, is identical in principle and almost in words used to the statement in the vision. A modius was a particular “measure” and a denarius was a “penny”. The effort of some emperors to curb the corruption of the provincial tax-collectors though was, again, generally in vain.

E.B. Elliot, 1862, Fifth Edition
The standard Historicist work – a detailed and thorough exposition in four volumes
Download the book
The Second Seal
The Fourth Seal
Return to top of page