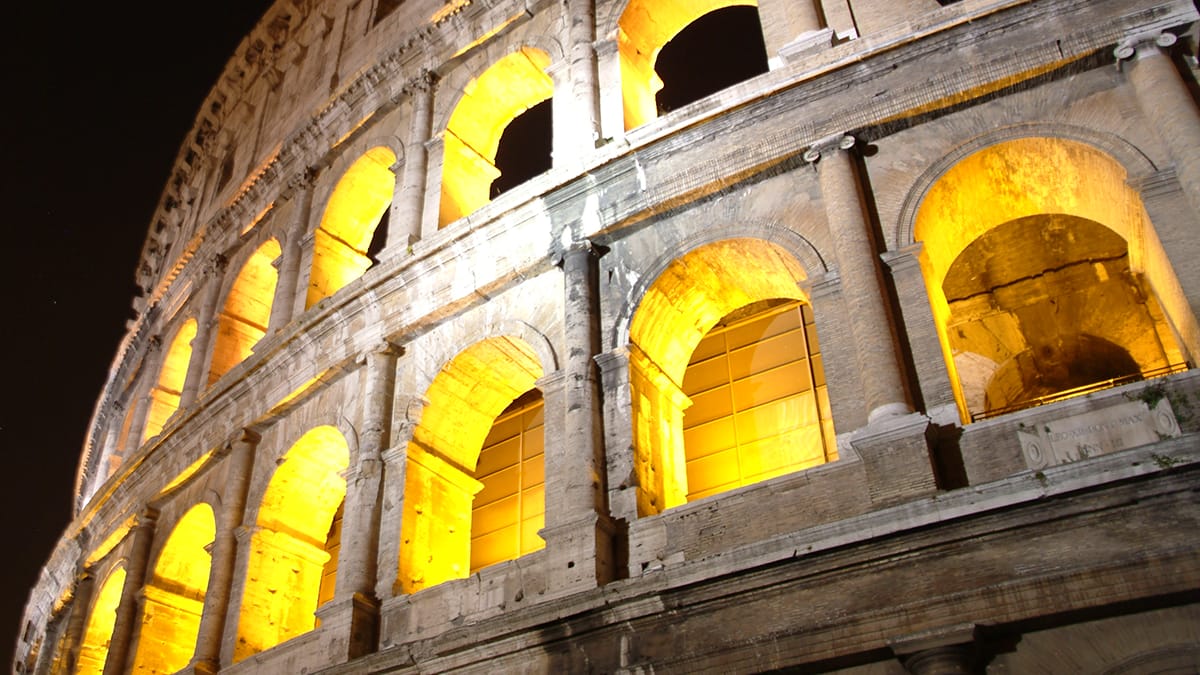 The Colosseum at Rome, built in the first century AD.

And when he had opened the fourth seal, I heard the voice of the fourth beast say, Come and see. And I looked, and behold a pale horse: and his name that sat on him was Death, and Hell followed with him. And power was given unto them over the fourth part of the earth, to kill with sword, and with hunger, and with death, and with the beasts of the earth.

Wars and oppression bring famine and disease. The empire suffers the inevitable results, beginning to crumble, as death rides the dying horse.
The ongoing internal wars and oppression resulted in a period of famine. Adding to this, a great plague killed between a quarter and a half of the people of the Roman Empire. In this period, the empire was also attacked from outside, and there are complaints from the same time about the rise of wild beasts which increased in the desolated countryside. The Empire by this time was described by historians as approaching complete dissolution, and similar to Europe after the time of plague called the Black Death. 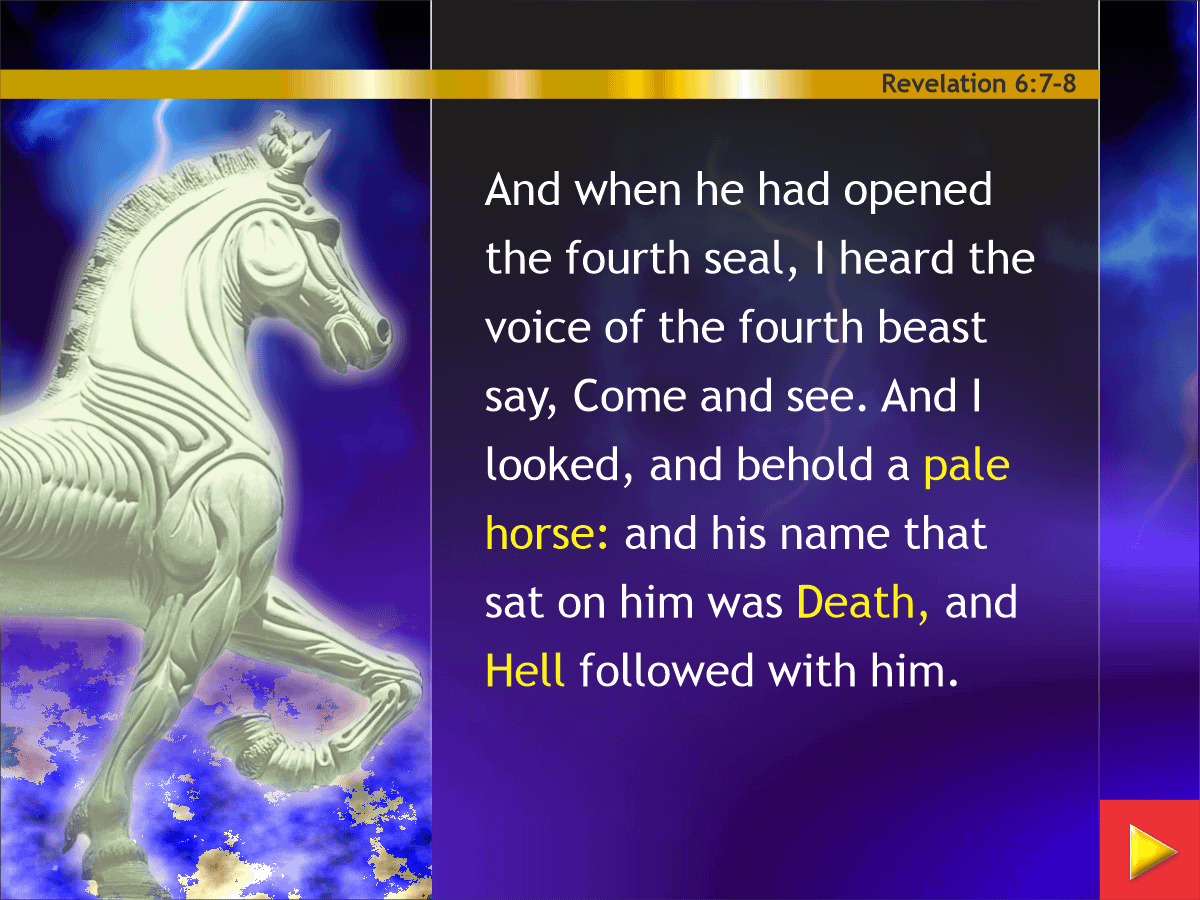 The encroaching of external armies on the borders of the weakened, infighting Empire and the effects of excessive taxation and oppression resulted in war, famine and pestilence.

The colour of the horse is “pale”, or “greenish” as the word means in Greek. It is the colour of death, or dying grass. Death rules over the empire, and the grave accompanies. The image already is clearly not a good one. 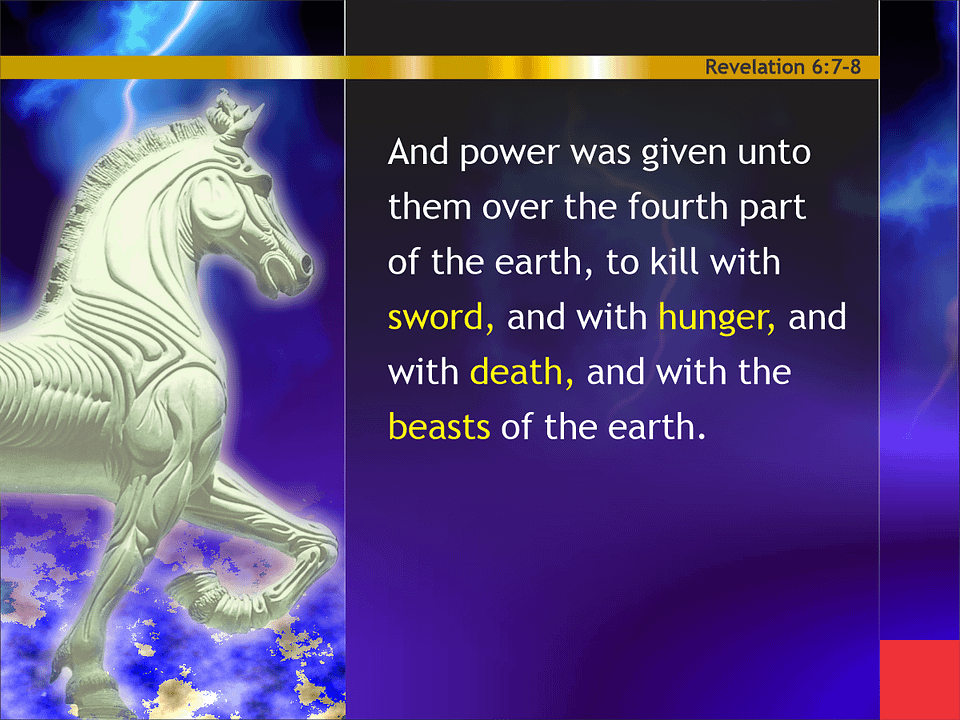 The four agents of sword, hunger, death, and beasts are worth comparing with a similar affliction upon Jerusalem mentioned in Ezekiel.

For thus saith the Lord GOD; How much more when I send my four sore judgments upon Jerusalem, the sword, and the famine, and the noisome beast, and the pestilence, to cut off from it man and beast?

It is likely that “death” means pestilence as listed in Ezekiel. Pestilence is often connected with war, dead bodies, crowded and unclean conditions within army camps and sieges, and with famine. The sword, hunger and wild beasts obviously bring death, but the listing of death itself suggests something like pestilence or plague which brings the same final result.

From the time of Decius after Philip, still within the period of civil war and oppression, the empire enters into further calamities: wars, famine and plague.

Note the distinction between “barbarous invaders” or outside enemies, and “military tyrants” or internal strife. The latter was symbolised in the previous seals as the result of increased military domination within the empire.

The approach of the “last and fatal moment of its dissolution” reflects well the dying colour of the horse.

Note the famine was the “inevitable consequence” of the previous seals’ “rapine and oppression” through heavy taxation, just as disease often follows famine.

Yet the plague seems to have been more than just a result of conditions in this case.

Gibbon notes the possibility that even half the empire’s population might have perished. Whether the correct translation in the scripture is “the fourth part” or “the four parts” of the empire it is obvious that either could easily fit the history. The plague raged throughout the empire right around the Mediterranean and it is quite possible that a quarter of the population perished.

Even the wild beasts are mentioned at this time in history as being a problem.

There were obviously complaints about the wild beasts encroaching on the devastated areas of the empire, just as there were complaints about the plagues, wars and famines. The pagans blamed the Christians for the calamities that came upon their empire. This fact is again worth noting as a lead-in and background to the next Seal – the last great Roman pagan persecution against Christianity.

The next three slides are quotes from historians about the end of this era under Diocletian, whose reign brings in the Fifth Seal. While looking at the change Diocletian brought about, they note the dying state of the empire in this previous era.

Note the historical name of “Death” associated in history with a great pestilence or plague. It echoes the label of Death given to the rider on the pale horse and the term “death” as being one of the agents of calamity upon the empire.

The dissolution, or breaking up, weakening and disappearing, of the Empire is a perfect fit for the afflictions and pale state of the horse in the vision.

The first four seals are shown to be grouped by the common symbols of horses and riders, and by their introduction in turn by each of the four living creatures (“beasts”). The consistent symbol of the horse, or warhorse, as a representation of an Empire helps us to recognise the central subject of the visions and start our interpretation in the correct era. The rider on the horse represents the controlling power or influence over the empire in each vision, and the colour of the horse reflects and confirms the effect of that controlling power upon the empire.

The fourth and last Gentile kingdom in the dreams of Nebuchadnezzar and Daniel was Rome, in both its pagan and papal phases. These two phases were symbolised by the iron (Imperial Rome), and then by the mingled iron and clay (Catholic Europe dominated by Papal Rome). But in Daniel's visions of the metallic idol, and the four beasts, these two phases are considered the one continuing, though changing, power of Rome. The iron of Rome runs through both. The apostle John lives in the first phase of the Roman power. Revelation is the tale of two kingdoms – the iron kingdom of Rome, and its conflict with, and ultimate defeat by, the stone kingdom of Jesus Christ (the Kingdom of God).

The character of the First Seal compared with the next three is obviously quite different: something good as opposed to something bad. The use of the horse and rider symbol throughout helps to ensure that the visions, however different in character, are applied consistently to the same subject. This also makes it harder to misinterpret the symbols, since the subject of them must experience both the good and the bad in order.