Odoacer and the Heruli The Eclipse of the sun, moon, and stars 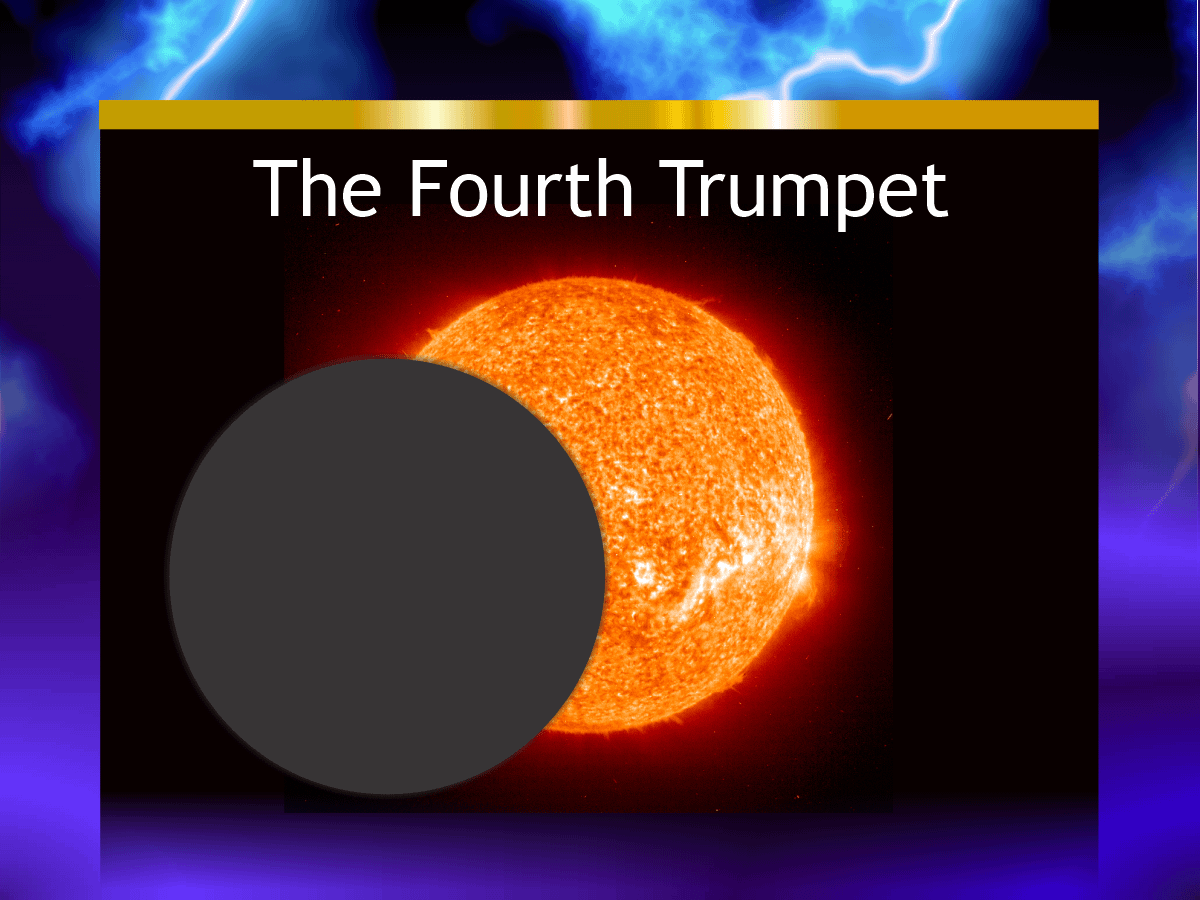 The Fourth Trumpet vision, like the Sixth Seal, talks of a darkening of the heavenly bodies. 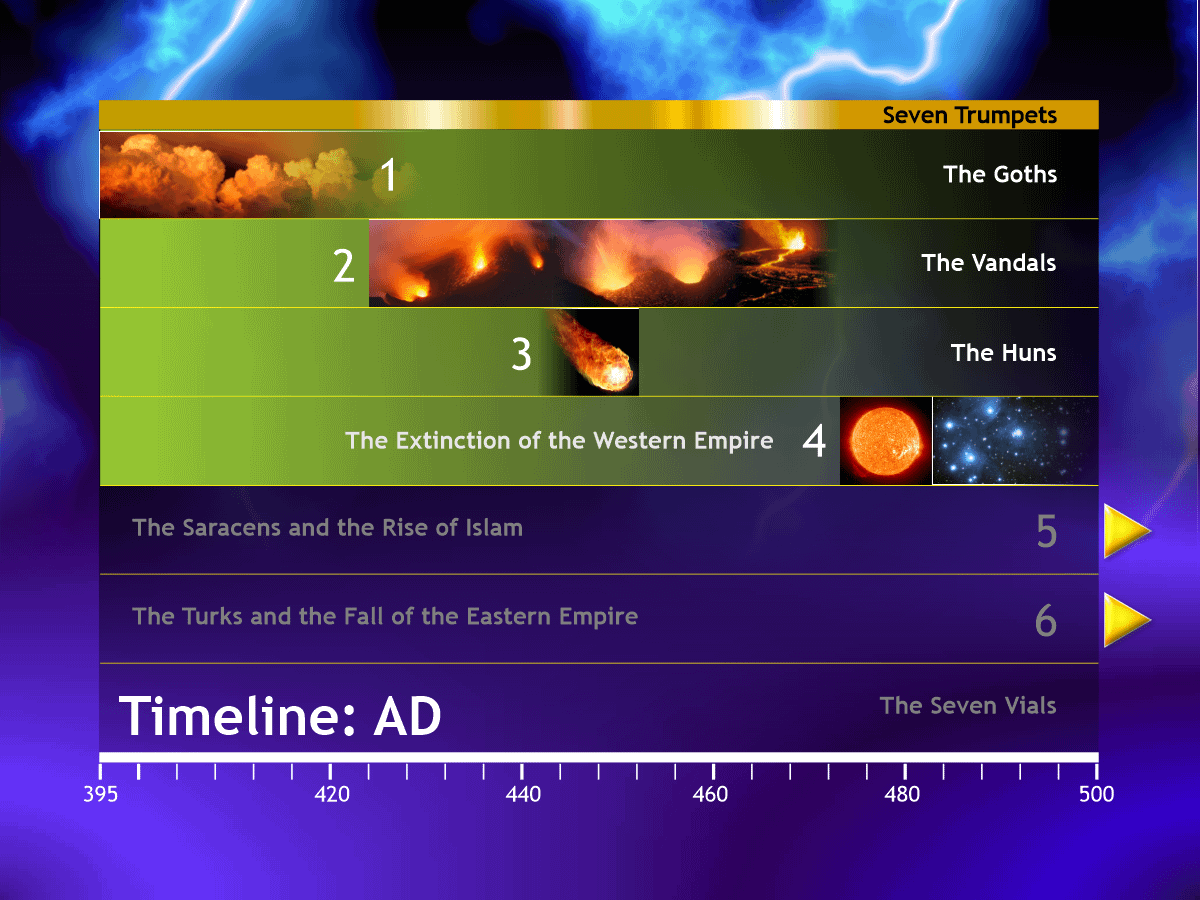 The eclipse of this vision refers to the final extinction of the Western Empire, demonstrated by the removal of the Western Roman Emperors and ruling authorities.

In this vision the focus is not upon the land, sea or rivers, but upon the heavenly bodies. These represent the ruling authorities of the Western third of the original Empire. Again, the reference to the “third part” ties the first four Trumpets together.

Here we see an announcement, and a grouping, of the other three Trumpets yet to sound. They are called the three “woe” trumpets, and are referred to as such later on as each is finished.

Revelation 9:12
12 One woe is past; and, behold, there come two woes more hereafter.

Revelation 11:14
The second woe is past; and, behold, the third woe cometh quickly.

These three “woe” trumpets ultimately encompass the rest of the entire fall of the Roman Empire in its Imperial and Papal aspects, as well as the fall of the Islamic Empires which succeeded the Eastern Empire.

Some of the barbarian tribes such as the Heruli, left behind in Italy by Attila, eventually rose up to extinguish the Western Empire completely.

Roman “glory” passed away. The light was extinguished.

As this quote (see following slide also) notes, the fall of the Western Empire ushered in what has been considered a dark era in history.

The close of the fifteenth century brings us to the Reformation, the rise and dominance of the Papal and Islamic empires intervening. The Reformation is a major subject of the Sixth Trumpet.

It is remarkable that history has even named the period ushered in by the eclipse of the Western Empire the “Dark Ages.” Note also the reference to the other important event at the end of this period, the Islamic triumph over, and fall of, the Eastern Empire. This will be seen to be the climax of the primary vision of the Sixth Trumpet.

Note the heading of this article in the Britannica. The very imagery used by the prophecy.

Even modern travel guides use the same symbolism as the prophecy! Venice originated as the inhabitants of the Po Valley fled Attila the Hun’s attack.

This author uses the term “eclipse” twice (see next slide also). Note that this quote sums up the whole first four Trumpets group. It begins with the division of the Empire and ends with the eclipse of the western emperors, noting the whole period was a struggle for supremacy between Rome and the barbarian kingdoms.

Peter Heather, in his work on the fall of the Roman Empire, notes that the Goths were the first link in a chain of events that terminated in the deposition of the last western emperor. In terms of the prophecy, the “chain” is the group of the first four Trumpets and their unified result. The individual “links” are the individual Trumpet visions.

The fall of the Western Empire was the beginning of Europe.

The Western Empire was the original seat of Rome's power. It is this area that forms the primary focus of Daniel's prophecies concerning the fourth kingdom.

Daniel's prophecies spoke of the iron kingdom of Rome being divided and mingled with other peoples into ten nominal kingdoms of “iron and clay – a “partly strong” and “partly broken” arrangement of  nations which would still retain the iron thread of Rome. Rome was to receive a “deadly wound”, yet it’s power was to revive in a different form after being healed. It would become “the beast that was, and is not, and yet is”. Europe was to continue in this state until the return of Jesus Christ, and the power of Rome was to dominate Europe for over a thousand years, yet wane and be consumed towards the end.

This history, which, apart from the kingdom of God, is the primary subject of the prophecies of Daniel and Revelation, is dealt with later in the book of Revelation. But the visions of the next two Trumpets first deal with the fall of the Eastern Roman Empire, and the rise of Islam.