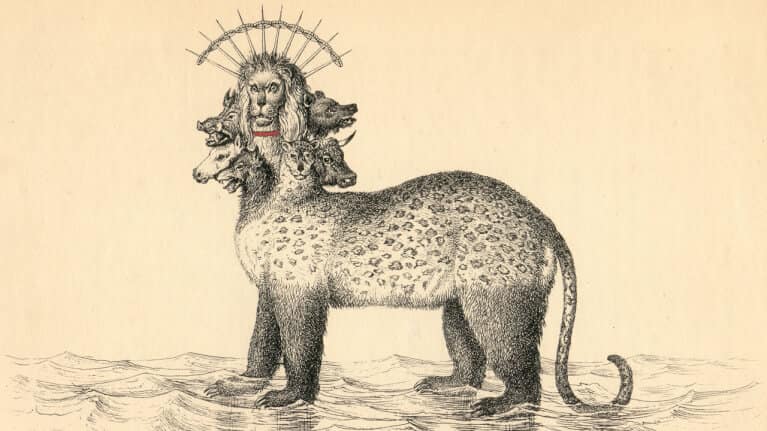 And the disciples came, and said unto him, Why speakest thou unto them in parables?

The Bible is full of symbols. One obvious example is the parables. In these we find smaller emblems and events which represent things far greater: the sower’s seed represents the Word of God; the thorns which choke the plant represent “the cares of this world, and the deceitfulness of riches, and the lusts of other things entering in”; and the field of tares and wheat represents the world.

The Bible also talks of types, figures, patterns and shadows in the law, in the temple and its furniture, in creation, and in the victories of men and women of faith—all of which represent greater promises, concepts, and principles than themselves. Man himself is a symbol—he was made in the image and likeness of God, and therefore given dominion over the earth—a great mystery.

Some symbols in the Bible are simple and familiar: oil, fire, water, a tree, a sword, a lamp, the sun, moon and stars. Other symbols are complex and unfamiliar: a scarlet beast with seven heads and ten horns, having attributes of a lion, a bear, and a leopard; horse-like locusts with the faces of men and the tails of scorpions; even a talking horn with eyes and a mouth, speaking great things. Some symbols are active natural events: falling stars, burning mountains, great earthquakes and storms of giant hail. Even time is used in the symbolic prophecies to signify greater cycles—such as each symbolic day representing a year in Ezekiel’s prophecy against Jerusalem.

How do we know what they mean?

Can we make any sense of such symbols? And by extension, of the symbolic prophecies in Daniel and Revelation? The answer is a definite yes. The Bible itself provides the keys. Many of these symbols are interpreted for us in scripture, and those that are provide the key to others of their kind. This is intentional; they are not interpreted randomly.

As Jesus said concerning the parable of the sower and the seed:

“And he said unto them, Know ye not this parable? and how then will ye know all parables? The sower soweth the word…” Mark 4:13-14.

Why not plain speech?

But if that is so, why doesn’t God speak more plainly? Many prophecies in scripture do speak plainly. Some of the greatest and most far-reaching revelations though are reserved to those who believe on him, and more generally withheld from those who do not. It is the privilege of the believer to glimpse and search out the greatest treasures God has in store. Jesus indicated that in this age he would manifest himself to the believer, rather than the unbelieving world, and that he would send them the Spirit of truth, whom the world cannot receive, who would “show them things to come”. Those who walk in the light see more than those who walk in the darkness.

This principle is demonstrated in Christ’s use of parables—symbolic stories. Both parables and the symbolic prophecies of Daniel and Revelation deal with the mysteries—the hidden treasures—of the kingdom of God, and many of those parables are themselves prophetic.

“And the disciples came, and said unto him, Why speakest thou unto them in parables? He answered and said unto them, Because it is given unto you to know the mysteries of the kingdom of heaven, but to them it is not given. For whosoever hath, to him shall be given, and he shall have more abundance: but whosoever hath not, from him shall be taken away even that he hath. Therefore speak I to them in parables: because they seeing see not; and hearing they hear not, neither do they understand. And in them is fulfilled the prophecy of Esaias, which saith, By hearing ye shall hear, and shall not understand; and seeing ye shall see, and shall not perceive: For this people’s heart is waxed gross, and their ears are dull of hearing, and their eyes they have closed; lest at any time they should see with their eyes, and hear with their ears, and should understand with their heart, and should be converted, and I should heal them. But blessed are your eyes, for they see: and your ears, for they hear” Matthew 13:10-16.

The mystery of the kingdom of God—the understanding of its progress, its nature, and ultimate victory—is not given to the world in this age “because they received not the love of the truth, that they might be saved”. Though the world in general has eyes and ears to see and hear, it does not wish to know. The parables and the symbolic prophecies are, however, designed to be understood by those who seek the truth—those who follow Christ.

“And when he was alone, they that were about him with the twelve asked of him the parable. And he said unto them, Unto you it is given to know the mystery of the kingdom of God: but unto them that are without, all these things are done in parables: That seeing they may see, and not perceive; and hearing they may hear, and not understand; lest at any time they should be converted, and their sins should be forgiven them” Mark 4:10-12.

“And with many such parables spake he the word unto them, as they were able to hear it. But without a parable spake he not unto them: and when they were alone, he expounded all things to his disciples” Mark 4:33-34.

A treasure worth digging for

God’s gifts and revelations are not for the superficial seeker. His treasures are reserved for those who will search them out—“And ye shall seek me, and find me, when ye shall search for me with all your heart” (Jeremiah 29:13).

So while the understanding is there for the seeking, that’s not to say that no effort or time is required, or that some of the details are easily deduced. Once the keys are understood though, the history, present and future of our world is greatly opened to us. That treasure is worth digging for.

In the following articles in this series we will look at the symbols the Bible has interpreted and see how these give us a logical understanding of others. We will also see that historians themselves, when writing of major historical events, often use the same prophetic imagery to help their readers picture the character of the events they relate.