Attila and the Huns 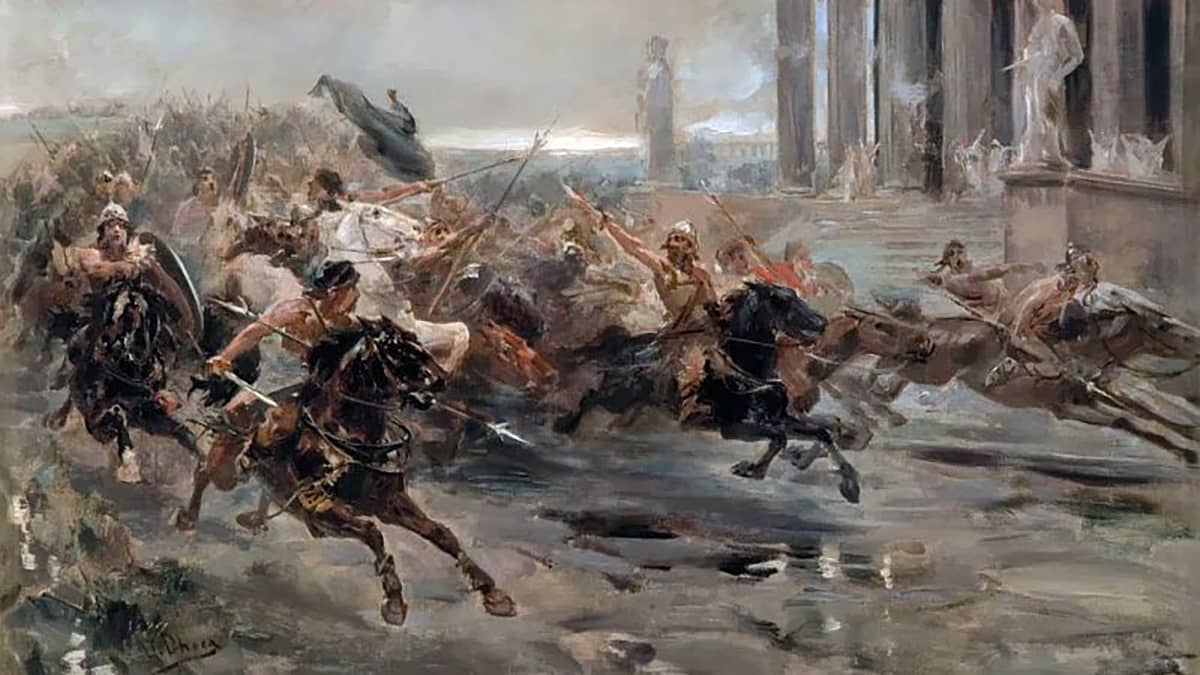 Invasion of the Barbarians, or The Huns approaching Rome.

The star falling on the rivers

A name of infamy and cruelty – Attila the Hun – appears in the riverlands and alpine areas of the Western Empire. His army brings destruction, misery, and fear.
The third wave of invaders brought the Huns under Attila. Attila attacked the riverlands of the Western Empire along the Danube and the Rhine. Though turned back he returned to sack the Italian Alps. He was particularly cruel and his name is infamous for the bitter state he left behind him. 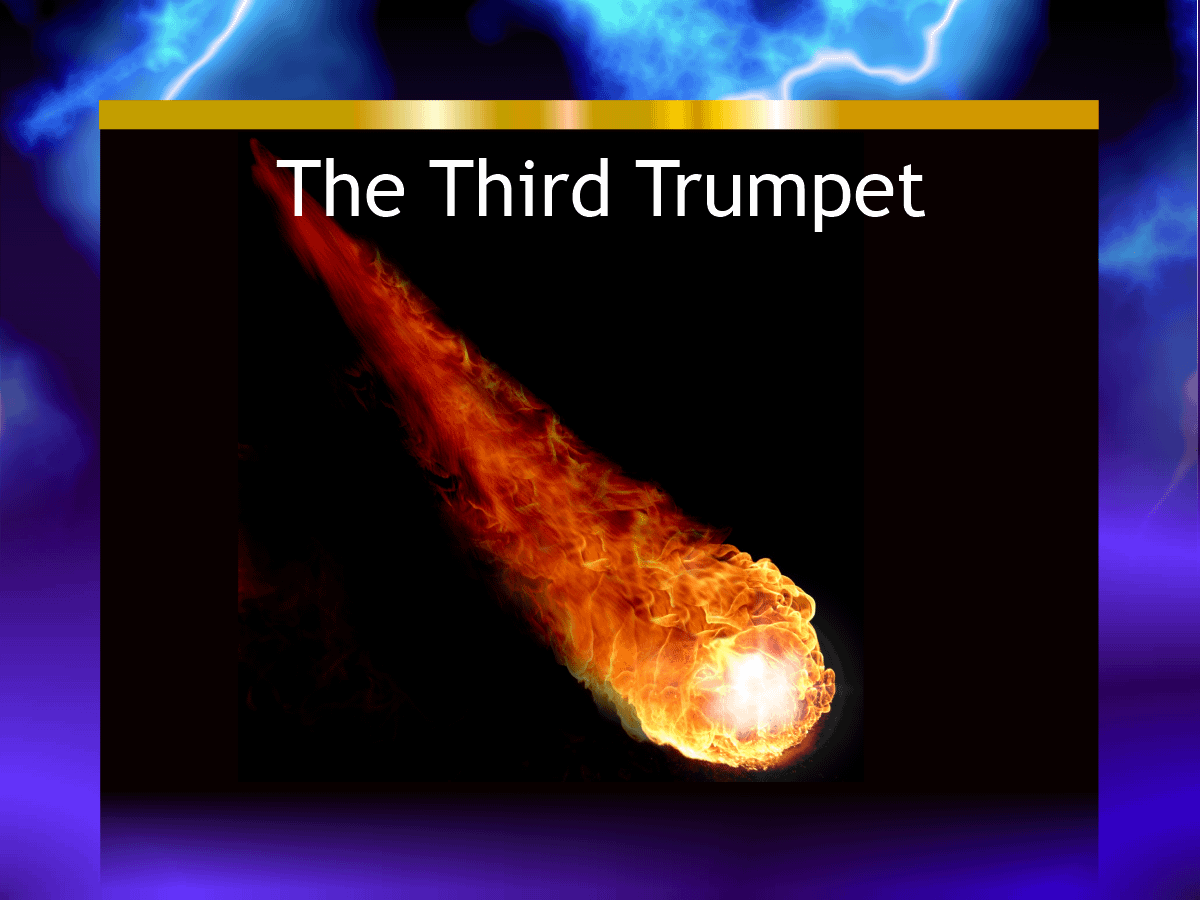 The Third Trumpet vision was of a great star falling from heaven upon the rivers, burning like a lamp. 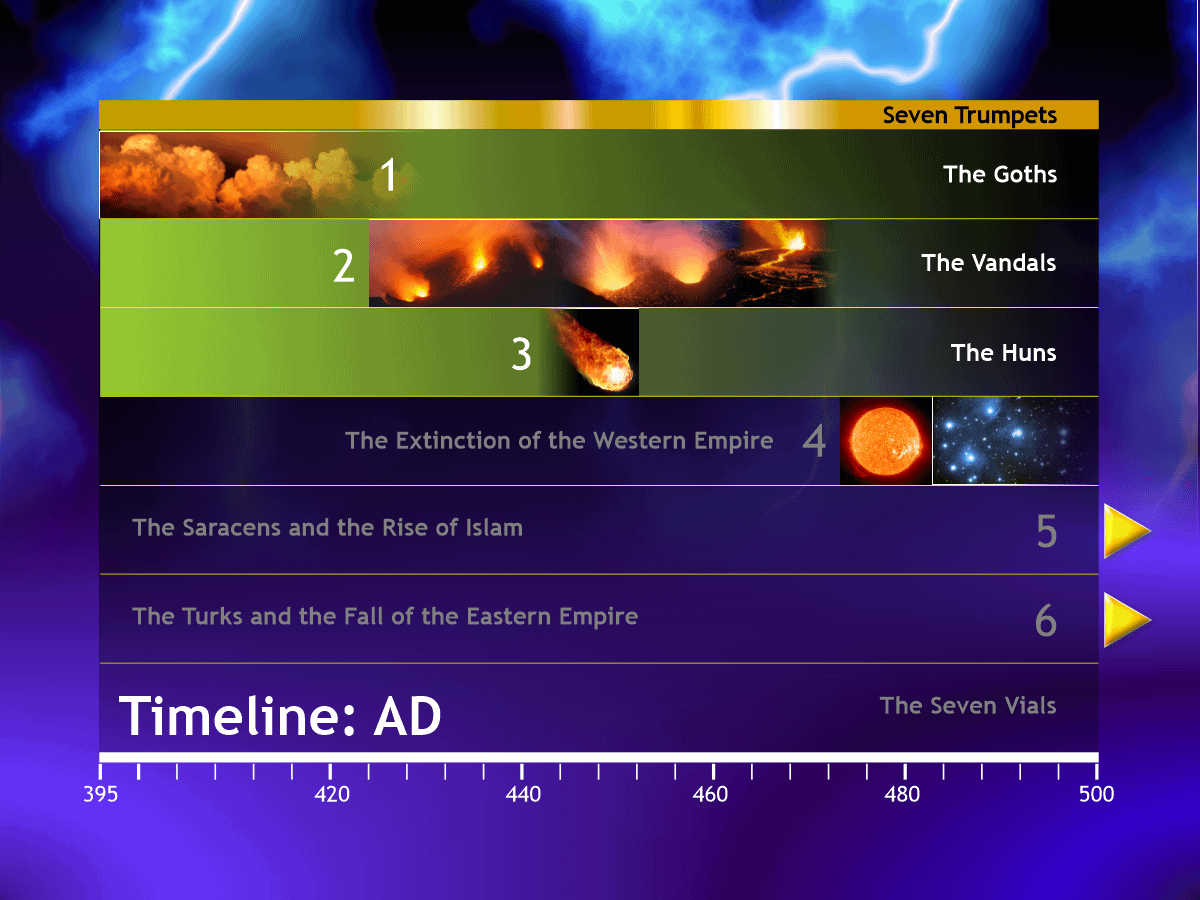 This vision describes the invasion of the Huns under Attila the Hun. His effect was not like that of the ongoing eruption of the Vandals, but was swift and bitter.

Here the affected area is specifically the riverlands and the source-areas of the rivers. This destructive power also has a “name”. The indication may be partly that the name of this destructive power is quite famous – renowned and terrible, above that of the other visions. Since this vision describes the attacks of Attila the Hun, it is worth noting that his name is generally more “recognisable” and infamous in history than either Alaric or Genseric.

Again the focus is upon the Western “third” of the Empire. The effect of this vision is particularly “bitter”. Attila was particularly cruel.

The name, “Wormwood”, given to the burning star means “bitter”. Wormwood is a bitter plant. In this prophecy in Jeremiah, we see again a key: the Lord promises to feed the people with wormwood, or bitterness, and to give them bitter water to drink. The prophecy explains (see next slide also) that the Lord will scatter them and send a sword among them. The meaning is clearly that God will send bitter warfare upon them until they are consumed. The wormwood and bitter water are symbols of the terrible bitterness of war that will overtake them.

Again using such prophecies as a key, the symbols in the Third Trumpet represent a terrible and bitter attack upon the riverlands and mountainous areas of the Empire.

It was the movement of the Huns from the northern parts of Asia which had pushed the other barbarian nations to migrate down into the middle area (orange) of the Roman Empire in the latter 300s. This began the mingling of the “iron” of Rome with the “clay” of other peoples, spoken of in the related prophecy of Nebuchadnezzar's Image in the book of Daniel.

Daniel 2:41-43
And whereas thou sawest the feet and toes, part of potters' clay, and part of iron, the kingdom shall be divided; but there shall be in it of the strength of the iron, forasmuch as thou sawest the iron mixed with miry clay. And as the toes of the feet were part of iron, and part of clay, so the kingdom shall be partly strong, and partly broken. And whereas thou sawest iron mixed with miry clay, they shall mingle themselves with the seed of men: but they shall not cleave one to another, even as iron is not mixed with clay.


The Goths in this middle area ultimately invaded the West, and later the Huns did also.

Under Attila, the Huns followed the great rivers into the main riverland areas of Western Europe, where eventually they were repulsed for the first time. Turning back they entered into Italy and destroyed the area around the alps.

These riverland and alpine areas constituted the “rivers” and “fountains of waters”, or source of the waters, of the prophecy.

Some of the cities affected by Attila’s campaigns. Chalons was the place of his first defeat. He then moved back to attack the Italian Alpine valley areas.

The historians liken Attila and other great Hunnish conquers to meteors, powerful and destructive but brief lived.

Again Attila was noted for his cruelty and is compared to a meteor. The vision actually speaks of a great falling star “burning like a lamp”. This is referring to a burning torch or brand. The photo in this slide is of a burning torch, which no doubt was a common sight in the destructive rampages of Attila, but its resemblance to a comet or meteor is worthy of note.

Another historian likens the character of Attila’s attacks as that of a “transitory meteor”. Note he specifically indicates, without intending to, that the image in the Third Trumpet vision would not be appropriate to the Vandals in the Second. The prophecy imagery is well chosen in each case.

Just as the symbol of a volcano was appropriate to the area affected by the Second Trumpet, it is interesting that a comet actually appeared overhead at the time of Attila’s fulfilment of the Third Trumpet vision.

The same point by another author.

And again by another.

A reputation or a name for cruelty explains the “name” of bitterness given to this burning star.

Attila in his first invasion followed the border rivers of the Danube and the Rhine and entered the main riverlands of Western Europe. Note the reference to the river banks filled with bones and death in a previous campaign.

Note the reference to being “put to the torch”—the falling star like a burning brand.

The Alps and Po Valley were the fountains, or source, from which the waters sprang. Attila attacked first the “river” areas to the Northwest and then the “fountains of waters” at the top of Italy, even in the same order mentioned in the prophecy.

Revelation 8:10
And the third angel sounded, and there fell a great star from heaven, burning as it were a lamp, and it fell upon the third part of the rivers, and upon the fountains of waters;

This extended quote (see following slides) describes the bitter situation of those who suffered Attila’s rampages, both during and after the battles, and again notes the infamous name or reputation of Attila.

The infamous Attila and his Huns have an appropriate place in the Trumpets describing the fall of the Western Empire.

E.B. Elliot, 1862, Fifth Edition
The standard Historicist work – a detailed and thorough exposition in four volumes
Download the book
The Second Trumpet
The Fourth Trumpet
Return to top of page