Genseric and the Vandals The burning mountain and the sea of blood

War comes to the Mediterranean Sea. The coasts, the islands, and the ships are ravaged by the second great wave of Barbarian invasions in the West – the Vandals under Genseric.
The second wave of invaders came as the Vandals, who had entered into Gaul (Spain), now broke out into Northern Africa, the breadbasket of the empire, and ravaged the Mediterranean Sea. The sea areas became the next great scene of bloodshed. In large naval battles the Vandals destroyed the fleets of the Romans and gained control of the coasts and islands. The Vandals again sack the city of Rome. 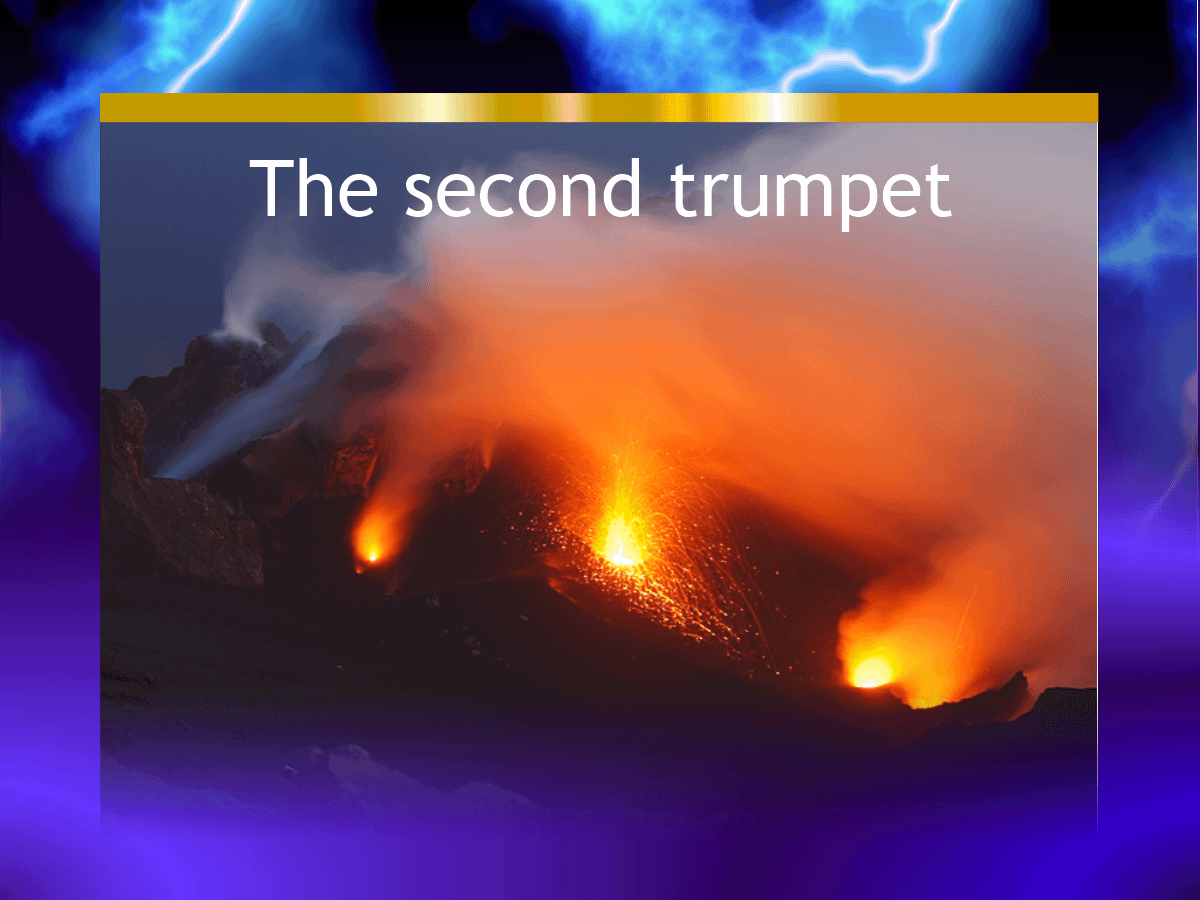 The Second Trumpet is the vision of a burning mountain cast into the sea. 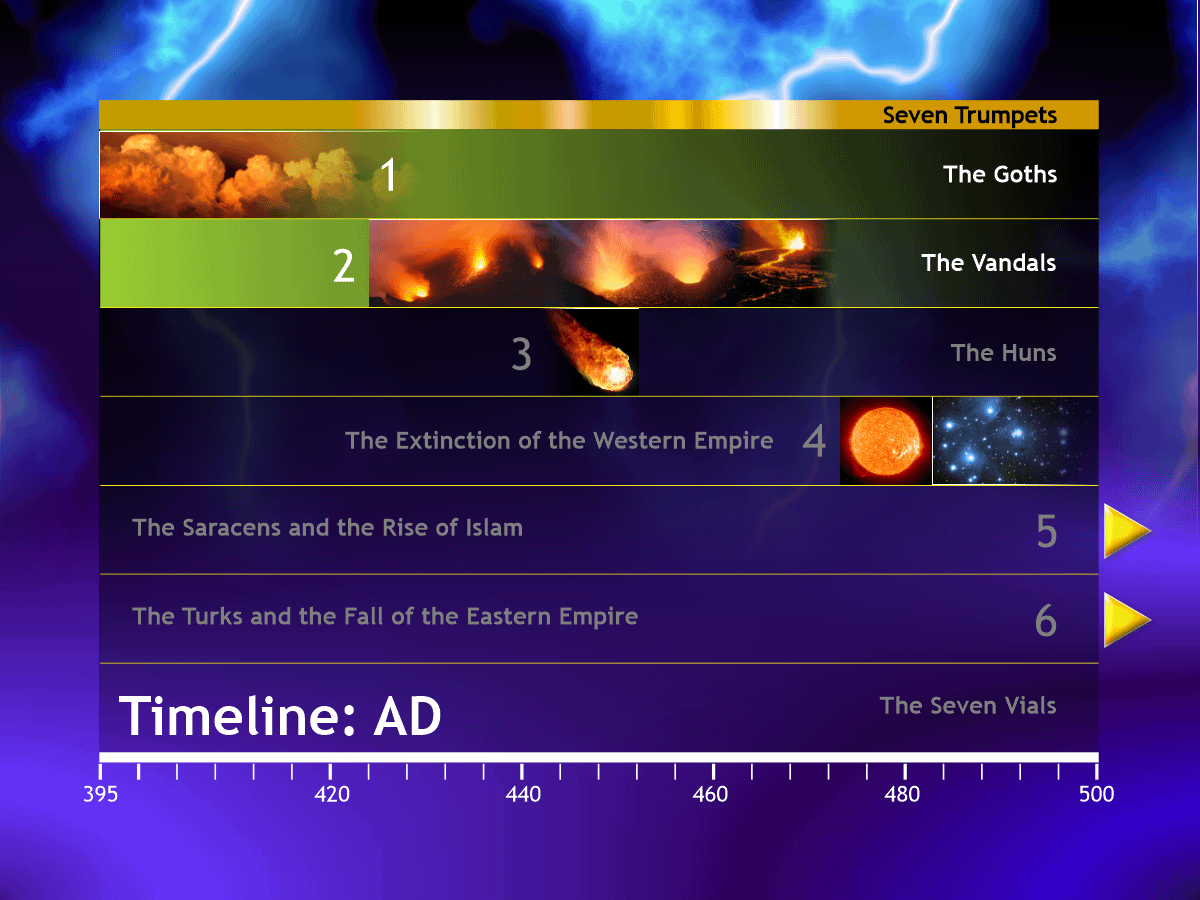 The second wave of destruction came in the form of the Vandal attack upon the Mediterranean.

A mountain is a symbol of a great nation or power in many prophecies. It represents the strength of a mighty people or kingdom, as it does in the prophecy of Nebuchadnezzar’s Image.

Daniel 2:35
Then was the iron, the clay, the brass, the silver, and the gold, broken to pieces together, and became like the chaff of the summer threshingfloors; and the wind carried them away, that no place was found for them: and the stone that smote the image became a great mountain, and filled the whole earth.

The focus of this Trumpet is upon the sea. Again there is fire and blood, loss of life of those who live in this area and the loss of many ships. Again, the focus is on the “third” Western part of the Empire.

A prophecy concerning Babylon in the Old Testament refers to a political and military power or empire as a “destroying mountain”, even a “burnt mountain (or “burning” mountain” as it can be translated) . Most commentaries consider this (and the Second Trumpet prophecy) a description of a volcano (see samples below). The vision of the Second Trumpet is likely of an erupting volcano cast into the sea, and the key provided in this prophecy in Jeremiah shows that it represents a strong and destructive people conquering and controlling the Western Mediterranean. (Note the example in Gill’s commentary of Etna and Vesuvius, which indeed are to be found in the Western Mediterranean.)

Jamieson, Fausset & Brown
Jeremiah 51.25 “burnt mountain — (Rev 8:8). A volcano, which, after having spent itself in pouring its “destroying” lava on all the country around, falls into the vacuum and becomes extinct, the surrounding “rocks” alone marking where the crater had been. Such was the appearance of Babylon after its destruction, and as the pumice stones of the volcano are left in their place, being unfit for building, so Babylon should never rise from its ruins.”

Gill
“…and will make thee a burnt mountain: reduced to cinders and ashes by the conflagration of it: or, ‘a burning mountain’: like Etna and Vesuvius; we never read of the burning of literal Babylon, but we do of mystical Babylon: see Rev 18:8; and with this compare Rev 8:8. The Targum renders it, a burnt city.”

Keil & Delitzsch
“From what follows, ‘I will make thee a mountain of burning,’ i.e., either a burning, or burnt, burnt-out mountain, modern expositors infer, with J. D. Michaelis, that the prophet has before his mind a volcano in active eruption, ‘for no other kind of mountains could devastate countries; it is just volcanoes which have been hollowed out by fire that fall in, or, it may be, tumble down into the valley below, scattering their constituent elements here and there; the stones of such mountains, too, are commonly so much broken and burnt, that they are of no use for building’ (Hitzig). Of the above remarks this much is correct, that the words, ‘I will make thee a burning mountain,’ are founded on the conception of a volcano…”

Clarke
“Jer 51:25 O destroying mountain - An epithet which he applies to the Babylonish government; it is like a burning mountain, which, by vomiting continual streams of burning lava inundates and destroys all towns, villages fields, etc., in its vicinity.”

Barnes
“Jer 51:25 O destroying mountain - A volcano which by its flames and hot lava-streams “destroys the whole land.”

The Vandals after settling in Spain, broke out under Genseric into Africa, taking Carthage and from there taking over the sea and attacking the northern coasts of the Western Empire.

Naval warfare and coastal raids, including a further sack of Rome, brought destruction and bloodshed.

Again, a historian unwittingly uses the imagery of the prophecy in describing the breaking out of the Vandals into Africa and the sea.

Again, the Vandals “erupted” on the scene.

Note here the “equal” ranking of the leader of the Vandals, Genseric, with the leader Alaric of the First Trumpet, and Attila (as we shall see) of the Third Trumpet. Each is worthy in history of being the subject of their own Trumpet vision.

Gaiseric, as seen in a previous slide, is another form of the name Genseric. Note the destructive nature of his invasion.

He soon controlled the “third” Western part, and occupied the islands in the sea.

We will read more about the great naval battles mentioned here in the following slides.

The satellite photograph here shows the tip of Italy and the island of Sicily. It also shows an erupting volcano with a plume of ash (Mt Etna – ringed). A number of famous volcanoes exist in the very area described in the vision. (In fact, most of the photos accompanying the slides in this section come from volcanoes in the Western Mediterranean.)

The African northern coast was the “bread-basket” food producing area of the Western Roman Empire. The conquering of this area by the Vandals crippled the West.

The coastal areas were ravaged. All that lived “in the sea” were affected.

They dominated the Mediterranean Sea, particularly in the west.

There were two major naval efforts to defeat the sea power of the Vandals, both ended in disaster for the Roman Empire, even when East and West combined against them. Vast numbers of ships were destroyed, as the prophecy specifically indicates. The first attempt was that of the Western emperor Majorian.

The second attempt was that of Basiliscus.

Genseric continued to ravage until the final fall.

E.B. Elliot, 1862, Fifth Edition
The standard Historicist work – a detailed and thorough exposition in four volumes
Download the book
The First Trumpet
The Third Trumpet
Return to top of page