The Golden Age of Rome 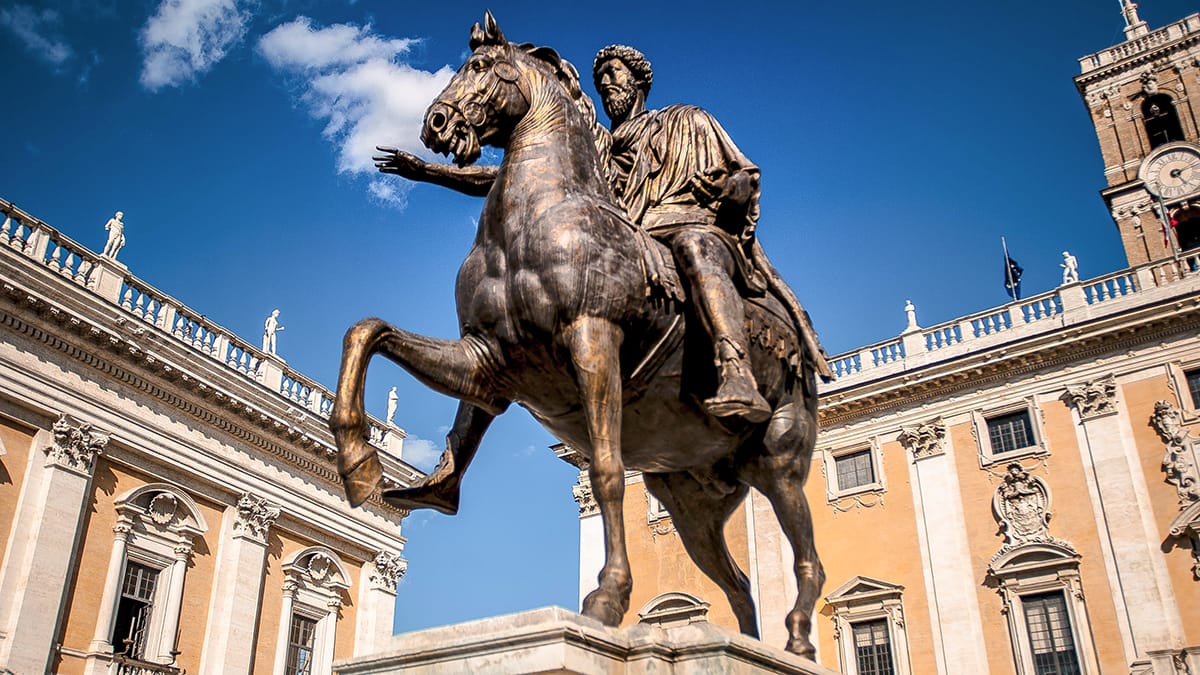 A replica of the original bronze statue of Marcus Aurelius on horseback. Marcus Aurelius was one of the Five Good Emperors who oversaw the Roman Empire at the height of its glory . The original (below) is on display in the Capitoline Museums. 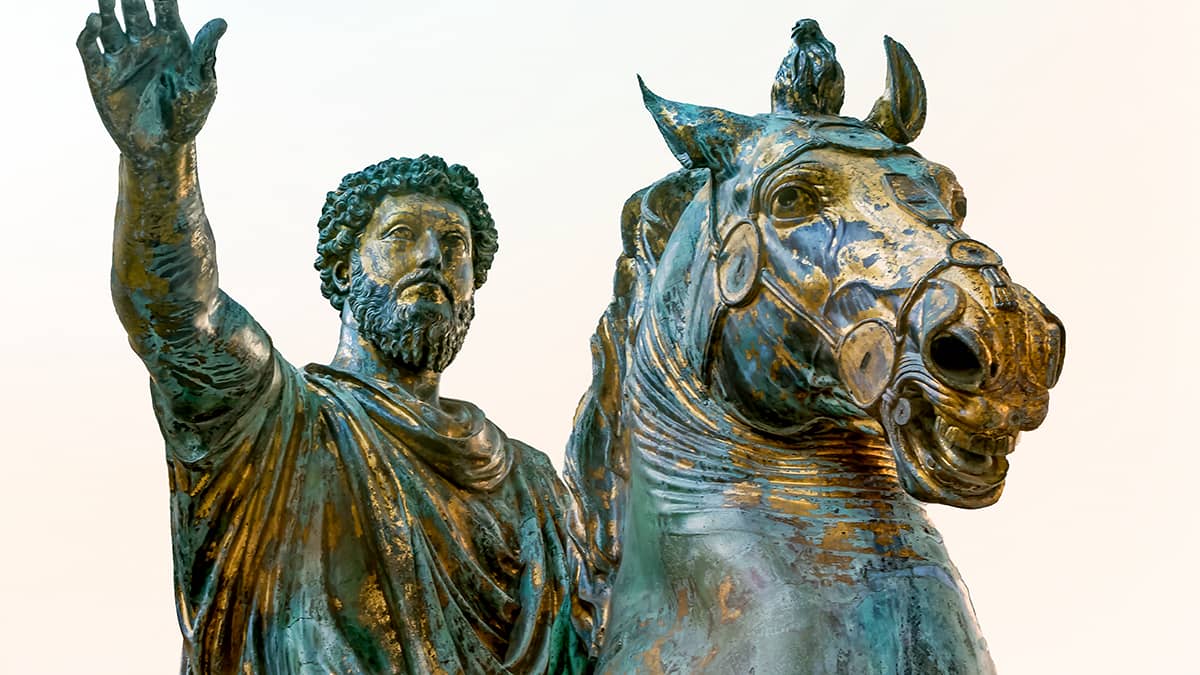 And I saw when the Lamb opened one of the seals, and I heard, as it were the noise of thunder, one of the four beasts saying, Come and see. And I saw, and behold a white horse: and he that sat on him had a bow; and a crown was given unto him: and he went forth conquering, and to conquer.

The glory days of Rome – the white horse and rider go forth to conquer. The era immediately following the writing of the book of Revelation sees the Roman Empire enter the peak of its power and prosperity.

In the visions of the first four Seals, the empire of Rome is represented by the symbol of a horse. The colour of the horse reflects the condition of the empire, and the rider the dominating influence which brought about that condition.

Almost immediately after the apostle John received the Revelation, a new era began in the empire—the era of the Five Good Emperors. These were the glory days of Rome, and its conquests expanded the empire to its greatest majesty and extent. The historian, Gibbon, began his work The Decline and Fall of the Roman Empire with this very period to contrast the peak of the Roman Empire before its decline and fall. 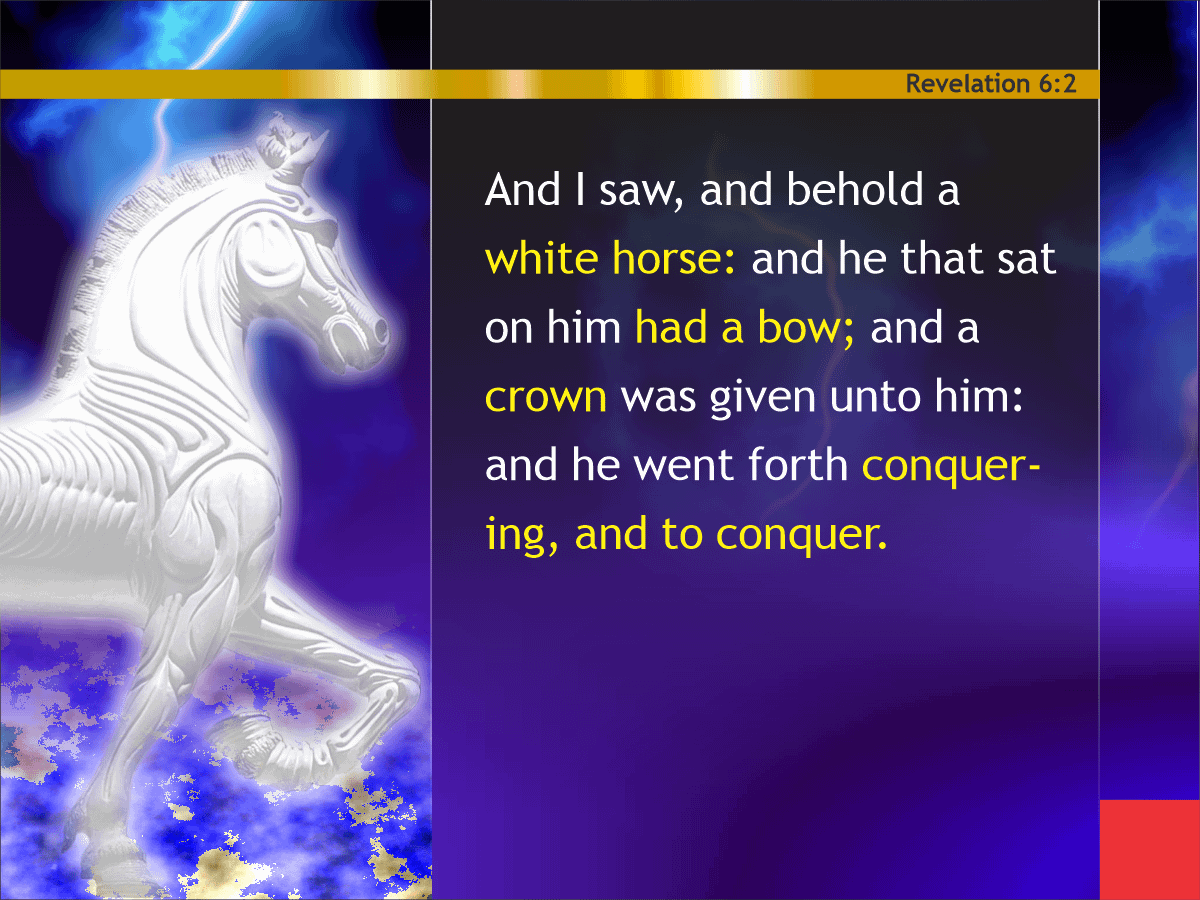 The white colour associated with the horse in this image would have suggested to the reader in this time the concept of victory and majesty. The Roman Emperors, and later Generals, would hold a triumphal procession on returning from a successful conquest in which they would take part clothed in white and upon a white horse—a further confirmation of the relevance of the symbol to the Roman Empire also. The impression this vision gives would be familiar as a Roman victory. The symbols of the bow and crown, and the command to conquer, reinforce this image as being a time of Roman glory and power over other nations. If the horse represents Rome the general meaning of the vision is not difficult to interpret.

Note here that the rider already had a bow when first seen, but not a crown (more on this later). The word for “crown” here means the laurel wreath, not a diadem (there are two Greek words translated as “crown” in Revelation and it is worth noting the change from one to the other in the visions). The laurel wreath was used at the time of this first vision, but superseded by the diadem approximately two hundred years later. This further helps to pinpoint the era represented in the vision. Later in the chronological series of visions, the diadem appears, just as it did in history.

The era of the First Seal is marked by the reign of five good emperors. This marks a great change in the Empire. Domitian is the last in a long succession of tyrants. It appears Domitian banished the apostle John to the island of Patmos, but Nerva released him.

Edward Gibbon, in The Decline and Fall of the Roman Empire, writes, “The golden age of Trajan and the Antonines [Antonius Pius and Marcus Aurelius] had been preceded by an age of iron. It is almost superfluous to enumerate the unworthy successors of Augustus. Their unparalleled vices, and the splendid theatre on which they were acted, have saved them from oblivion. The dark unrelenting Tiberius, the furious Caligula, the feeble Claudius, the profligate and cruel Nero, the beastly Vitellius, and the timid inhuman Domitian, are condemned to everlasting infamy. During fourscore years (excepting only the short and doubtful respite of Vespasian’s reign) Rome groaned beneath an unremitting tyranny, which exterminated the ancient families of the republic, and was fatal to almost every virtue and every talent that arose in that unhappy period.”

The five good emperors were a dynasty begun by Nerva. They were not related by blood, but each successive emperor, beginning with Nerva, chose and legally adopted the succeeding one as his successor. These emperors were chosen on merit, not bloodline. This ended when the son of Marcus Aurelius, Commodus, came to the throne, and a time of civil war began.

Nerva was the first Emperor of a non-Roman, and even non-Italian family. His family was Cretan, from the isle of Crete. The Cretans were famous for the use of the bow (as the Bible also indicates), and the bow was used as a symbol of a Cretan (as the boomerang might be of an Australian). The fact that the rider of the horse was already holding a bow before being crowned may be intended as a clear pointer to the first emperor of the dynasty ruling this era, confirming the start point of the entire vision. It is not a typical Roman weapon – the sword or spear was the weapon more usually depicted in the hands of an emperor. It may also represent the thought of conquering enemies at a distance, in line with the character of the vision.

Under these five emperors, the empire of Rome reached its greatest extent, and the period was one of conquering and victory, as well as internal peace and glory.

Gibbon begins his great historical work, The Decline and Fall of the Roman Empire, by first examining the peak of Rome's glory during the specific period of the five good emperors, immediately after which the decline begins. The prophecy does the same.

The character of the period is one of absolute power, vast extent, and glory.

During this time the power of the armies was restrained. This would change, bringing civil war, under the next seal. It was a time of internal peace.

The character of the period was one of the height of Roman majesty, and expansion.

This famous period of internal peace and glory gave way to a succeeding period of chaos and civil war, which is the subject of the Second Seal.

During the period, the white horse and rider “went forth conquering, and to conquer”. The bow may also represent fighting enemies afar off, which was part of the character of this period. Trajan was called the “Alexander the Great” of Rome because of the extent and swiftness of his conquering. In this period, under Trajan, the Roman Empire reached its greatest extent.