The devil didn't really make us do it 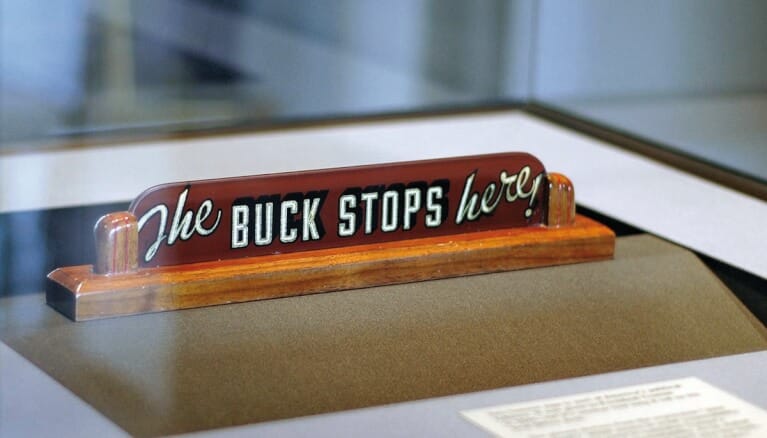 And the son said unto him, Father, I have sinned against heaven, and in thy sight, and am no more worthy to be called thy son.

The buck stops here is a phrase that was made popular by U.S. President Harry S. Truman, who kept a sign with that phrase on his desk in the Oval Office. The phrase refers to the fact that the President recognised he had to make the decisions and accept the ultimate responsibility for those decisions. He was not going to blame anyone else because when he took the job he knew that the responsibility went with it and he agreed to it. “Passing the buck” is the alternative. It originated in poker where it meant passing the responsibility (the deal) onto the next person, and it has come to mean evading responsibility or shifting blame on to others.

The problem is contagious

According to the January 2010 edition of the Journal of Experimental Social Psychology, blaming mistakes on others is socially contagious. Not only does this habit spread, but when people blame others for their mistakes, they actually learn less (not learning from their mistakes, because they haven’t made any) and performance and productivity suffer. This problem is magnified when blame becomes embedded in the culture of groups or organisations.

Today we live in a world of “passing the buck” where everyone is very quick to blame others or claim diminished responsibility because of mitigating circumstances. Somewhere there has to be a reason so that it is “not my fault”.

This of course is not a new problem. If we look at one of the very first conversations ever recorded, in Genesis 3:9–13, it involved both Adam and Eve “passing the buck”, as Adam blamed Eve and then Eve blamed the Serpent. God however was neither impressed nor was he fooled as he held them all responsible for being disobedient to his Word, and there were consequences for all concerned.

One of the consequences that came out of this situation was that mankind became truth evaders, responsibility evaders and God evaders. Much later when God freed Israel from bondage in Egypt he tried once again to teach them to accept responsibility. The Lord called Moses to Mt Sinai to give him commandments and laws for his people. These were to be basic instructions to show them that with their freedom went a responsibility—to listen to and obey God’s Word.

The people got bored even waiting for Moses, and they got totally side-tracked and said to Aaron the priest, “Up, make us gods, which shall go before us.” Aaron, instead of putting them straight, standing firm, and telling them they were wrong, collected up all of their gold jewellery and made an idol, a golden calf for them to worship. When Moses came down from the Mount he was furious; he smashed the stone tablets that God had written on, destroyed the calf, and demanded of Aaron, “What have you done?” Aaron at this time would not shoulder the responsibility and simply blamed the people and quite incredibly had a go at blaming the idol itself: “So they gave me [their gold]: then I cast it into the fire, and there came out this calf.” Once again God was not impressed and all had to suffer major consequences.

Repentance is the opposite

We see the opposite in an interesting story in the New Testament, of a man who made some wrong choices and some silly decisions. However, when things went horribly wrong with his life he recognised that he only had himself to blame, and he was willing to accept the consequences of his actions. His father accepted him back with love and compassion. This story in Luke 15:11–24—of the “prodigal son” and his return to his father—is a wonderful picture of a person recognising he is responsible for the mess he is in and coming back to God with a humble attitude. If this story was written today it would probably have all the do-gooders coming up with a million excuses for his actions: bad upbringing, bullying, falling in with the wrong crowd etc. And therein lies the problem: no-one wants anyone to simply accept responsibility for their actions. However, we see that when we do (it’s a part of what the Bible calls repentance) God the Father welcomes us with love and compassion. This is a decision, an attitude, that no-one else can make or have for us. Each of us needs to recognise that we are indeed responsible for every decision we make.

The Bible says that we will all be held accountable for our actions, particularly how we have reacted to the gospel, God’s words. There can be no excuses, no-one else to blame, as God gives us all the same opportunities and with them, the same responsibilities.

Philippians 2:12 says “work out your own salvation with fear and trembling.” This simply means to fulfil all that is necessary to accomplish the salvation that God has promised. It is God that is working in us to achieve this, but we have to desire this more than anything else and “Set our affection on things above, not on things on the earth” (Colossians 3:2). No-one else can do that for us, and no-one else can make us not do it.

No-one else has, or can have, the effect on our salvation that we ourselves have. It is every person’s duty to be as happy as possible here, and to be prepared for eternal happiness in the future world. “The buck stops here.”

Alan Butler is the pastor of the Bay of Plenty Revival Fellowship in New Zealand. The thoughts and understandings expressed here are solely his own.