The sea and the waves roaring

The distress of nations with perplexity 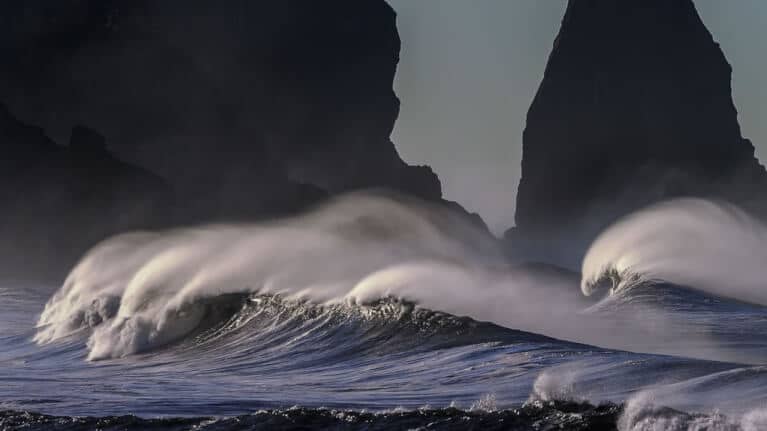 This article first appeared in our NZ newsletter "Revive" in 2011, but world events since then have only increased its relevance.

I am writing this from Christchurch, where for the second time in six months we have had a major earthquake. Over 180 people were killed, the central city is in ruins, and the suburb I live in is one of the worst hit residential areas in town. My house is damaged, my mother’s house down the road was flooded, and the whole area has been ripped up, dropped down, and filled with silt and mud thrown up by the shock. Our assembly’s hall complex had its front two-thirds demolished after the first quake, and the remaining rear hall looks like being demolished after the second.

I learn later that an old, unused picture theatre I sat in front of in my car an hour or so before the quake fell outwards onto the road right where I had been. I had been looking up at the frontage, wondering what the owners intended to do with the building. It’s now a pile of rubble. I suppose that answers the question.

Shortly after the power and water came back on two weeks later, we were able to watch the unfolding horror in Japan—earthquake, tsunami and nuclear reactor breakdown complete with real-life surround-sound aftershocks shaking our own living room. The people killed in Japan may number in the tens of thousands. Watching the videos of walls of water pouring through streets and carrying everything away with it, I'm suddenly glad I'm in broken Christchurch.

What could be worse?

As horrible as the power and aftermath of these things can be, the Second World War, as a brother noted here in a talk, a man-made upheaval, killed between 50 and 70 million people, and continued shaking the world for some six years. The uncertainty in that figure shows the massive destruction and confusion of such a global war. Twenty million additional people—the equivalent of the entire population of Australia, or four times the population of New Zealand—may or may not have perished. We don’t know. And all this only two decades after the First World War killed something like 16 million. These figures are not in the hundreds, or thousands, or hundreds of thousands. These figures are in the millions. Each of the two atomic bombs dropped on Japan at the end of the war alone killed many more people than the recent 9.0 quake and tsunami combined. As the Japanese Prime Minister said, the recent disaster is Japan’s biggest . . . since the Second World War.

At the time the 2011 Christchurch quake hit, revolutions were sweeping over the Middle East. The revolutions continue. These human upheavals are shaking one of the most dangerous and unstable parts of the globe. The technology of instant communication and simultaneous connection, wonderful potential that it may have, also opens the world to the danger of nationwide and worldwide mob mentality. One angry voice quickly becomes a roar.

The area undergoing revolution is prophesied in the Bible to feature in a further great war and upheaval yet to come upon the world, the like of which has never been seen before, in which “the very elements shall melt with fervent heat” with “blood, and fire, and pillars of smoke”. The warning is that man is more unstable and destructive than nature.

And there shall be signs in the sun, and in the moon, and in the stars; and upon the earth distress of nations, with perplexity; the sea and the waves roaring; Men’s hearts failing them for fear, and for looking after those things which are coming on the earth: for the powers of heaven shall be shaken. Luke 21:25-26

The phrase “the sea and the waves roaring” naturally calls up something like an image of the tsunami in Japan, or that of the Boxing Day tsunami in 2004. And the time Jesus is speaking of may well be a time in which such natural events terrify the world. But in scripture the same image is often used to illustrate the much greater instability and raging of mankind. The distress of nations, with perplexity, is caused mainly by the tumults of man.

The Bible declares the wicked are “like the troubled sea, when it cannot rest, whose waters cast up mire and dirt” and describes them as “raging waves of the sea, foaming out their own shame”. It talks of individuals being “as unstable as water” and “tossed to and fro, and carried about with every wind of doctrine”.

The roaring of the great waters typifies the “raging of the heathen”— driven by their vain imaginations and every kind of false belief. In Jeremiah 51 the prophet says, “the LORD hath spoiled Babylon, and destroyed out of her the great voice; when her waves do roar like great waters, a noise of their voice is uttered”.

Like the crowd who raged against Paul the apostle when the whole city of Ephesus was “full of wrath” and “filled with confusion” and “some therefore cried one thing, and some another: for the assembly was confused; and the more part knew not wherefore they were come together”, it is the “great voice” of man and his confused opinions that are the real danger to the people of this earth.

Man tries to stem the tide, but he cannot. The well-known declaration just before the beginning of the Second World War by Neville Chamberlain, the British Prime Minister, should keep us wide awake: “I believe it is peace for our time. . . . And now I recommend you to go home and sleep quietly in your beds.”

The Bible warns against those who say “Peace, peace; when there is no peace” and warns also we should not be caught asleep:

But of the times and the seasons, brethren, ye have no need that I write unto you. For yourselves know perfectly that the day of the Lord so cometh as a thief in the night. For when they shall say, Peace and safety; then sudden destruction cometh upon them, as travail upon a woman with child; and they shall not escape. 1 Thessalonians 5:1-3

Those who trust in God can look forward to the day when Christ, the Prince of Peace, appears, “the sea and the waves roaring” and, rebuking the winds of world opinion and the “raging of the water”, commands, “Peace, be still!”.